San Francisco, CA  (June 2, 2009) – Today, telecom innovator sipgate (www.sipgate.com) is launching a new, free phone service that has the ability to replace most of the nation’s 100 million landlines.  The new service, called sipgate one, operates over your Internet connection and offers a fully-featured phone service, complete with a free telephone number, no set-up costs and no monthly charges or minimums.

sipgate is extremely flexible and works with your favorite phone, including standard analog phones, mobile phones or VoIP phones. When using a VoIP phone, calls to other sipgate users are completely free (like Skype)  and so is receiving calls on the free U.S. phone number sipgate one comes with (unlike Skype).  Calls to the U.S. and Canada are just 1.9¢* per minute. 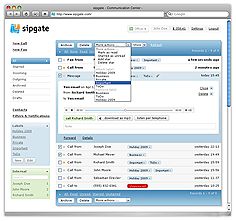 Unlike traditional phone services, sipgate is completely Web-based, making it accessible through a simple, easy-to-use interface - much like your favorite web-based email service.  The interface allows users to call someone back with a single click, divert calls to other landline or mobile phones, and browse their inbox and outbox for a complete history of voicemail messages, calls, recordings and faxes.

- Need to write down a number while driving?  Record any phone conversation by pressing *6
- Want to customize your voicemail?  Upload an mp3
- Want your calls to follow you?  Have your home, office and mobile phone ring in parallel
- Left your mobile phone at home?  Simply go online and divert calls to your office line
- Want to talk to friends in an ad-hoc conference? Bridge them with the touch of a button
- Missed calls while on a flight?  A list is waiting for you in your email

"There is simply no barrier to people disconnecting their old phone lines anymore. Phone and cable companies have long been pushing voice plans in the region of $25 to $40 per month—which end up being as much as $60 or more with extra charges—and that’s just ridiculous,” said Thilo Salmon, CEO of sipgate.  “Even with calls to other landlines and mobile phones, most users will spend less than $5 a month using sipgate one. And for those people only receiving incoming calls on their VoIP phone, the service is completely free."

sipgate is also readying a multi-user edition of the service. This service will be targeted towards innovative small businesses and will not only replace landlines, but also costly and complex local phone systems.

About sipgate
Based in San Francisco, sipgate is a well-established, recognized company in Europe where it has been successfully building its telecom business since 2004.  Today, it is arguably the most popular “network agnostic” phone service in a number of European countries. No stranger to disruptive business models, sipgate pioneered a VoIP client for iPhones in 2008 and consequentially challenged T-Mobile Germany in court over its lack of net neutrality and deceptive advertising.

sipgate® is a trademark used under permission by sipgate, Inc.

* International rates start at 1.9¢. sipgate only charges for outgoing calls and E911 ($1.90 monthly), if activated . No other chargers or fees are leveraged on a sipgate one subscriber.