The international technology M&A and growth finance advisors reveal that total transaction volume grew five per cent per year from 2014 to 2018 across the globe, while total value raised grew by 13 per cent, suggesting that funding rounds are becoming larger. 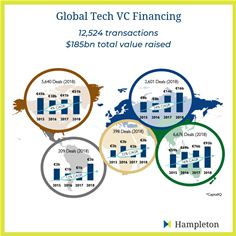 Asia-Pacific also charted the highest growth in absolute value, propelled by the increasing prevalence of massive investment funds such as Softbank’s $100 billion Vision Fund and Tiger Global’s new $3.75 billion tech fund, both having contributed to some of the record 21 new Asian unicorns born in 2018.

Over a four-year period, Europe walked away with the highest relative growth, witnessing a 24% CAGR over three years, with the number of deals having doubled since 2016. The proliferation in Europe of early stage funding rounds and the higher value they generate are the result of favourable government programmes, thriving tech hubs from Stockholm to Berlin, and a highly active and maturing investor environment.

Supergiants and Unicorns
“Supergiant” funding rounds – venture capital rounds generating funds in excess of $100 million – are becoming commonplace. 2018 saw 515 supergiant rounds, more than 2017 and 2016 combined. Although they accounted for only two per cent of all rounds worldwide, they secured a massive 56 per cent of the total $185bn value raised.

Miro Parizek, founder and principal partner, Hampleton Partners, said:
“We’ve witnessed the highest level of venture capital investment on record, both in volume and value terms. This has included an unprecedented increase in the number of supergiant rounds and new unicorn births, in addition to growth in all median sizes of funding rounds. The total value of all unicorns has also inched above $1 trillion.

"This seemingly boomish growth is driven by the new wave of start-ups causing extreme disruption in traditional industries such as automotive, retail, security, and healthcare in addition to the larger start-ups continuing to fundraise from favorable private markets. While lights are bright green for the VC markets, this high growth in all metrics may also be a signal of overheating markets of increasingly cash-rich funds making increasingly risky investments."

Largest transaction
The most valuable company on 2018’s unicorn list is Bytedance, a Chinese machine learning content platform. Bytedance was valued at $75bn in its October fundraise in a round led by Softbank and joined by KKR and General Atlantic.

Sector-focused funding
Fintech proved to be the most popular sector for investors, as consumer solutions aiming to revolutionise the banking and payments industry gained traction. Among the new unicorns born out of the rounds completed by Ant Financial or JD Finance in the second half of 2018 were N26, Plaid Technologies, Viva Republic and Monzo.

Autotech investment took second place with the highest number of VC investments in car-related businesses on record, totalling 355 vs. 325 in 2017, though total equity value raised was down to $13.5bn (€12bn) from a $25bn (€22bn) high in 2017, which was achieved after several mega-transactions by Softbank.