Architectural proposal of SinterHab moon base could be built by large NASA spider robots by using microwaves, solar energy and lunar dust

LONDON – 5 March 2013 – A microwave 3D-printed Moon base could be a sustainable solution for presence on the Lunar South Pole, the SinterHab concept shows. Space architects Tomas Rousek, Katarina Eriksson and Dr. Ondrej Doule have unveiled their vision for a lunar module which shows the potential of 3D printing technology from NASA. Modules would be constructed from lunar soil by microwave sintering and contour crafting making use of NASA JPL robotics system near the Shackleton crater. 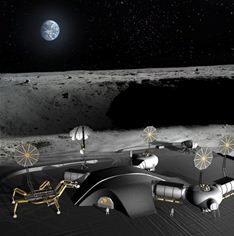 Imagine that you took the solar energy and the dust from the ground and baked the dust using microwaves to directly construct any shape you wanted. On Earth it would sound like science fiction but on the Moon it would be feasible due to the unique properties of the lunar soil and the absence of anatmosphere. Microwave sintering creates a solid building material similar to ceramics, purely by microwave heating of the dust. Robots equipped with this technology could bake the lunar dust without any glue brought from Earth.

Due to the nano-sized iron particles in the lunar dust produced by space weathering, it is possible to heat the dust up to 1200 – 1500 0C and melt it even in a domestic microwave oven. When the lunar dust (regolith) is heated and the temperature is maintained below the melting point, particles bond together and the building blocks for the lunar habitat can be created. In the future, we could build structures of entire cities on the surface of the Moon by using solar energy. We can significantly decrease mass, costs and environmental impact if we don’t need to send glue or other binding agents from Earth. Furthermore, the hardening of the surrounding surface of the base would help mitigate the hazards of contamination from lunar dust, which is highly abrasive and harmful to both astronauts and equipment.

An innovative internal membrane system of SinterHab offers up to four times bigger volume of the module than classic rigid modules at the same weight shipped from Earth. Nature provides inspiration for the inflatable structures in the form of foam bubbles. The intention of building several compartments with sintered walls led to a design based on the geometry of bubbles, where the forces of neighbouring bubbles are in equilibrium and enable the building of flat walls. It would be possible to make the modules large enough to accommodate  even a green garden that recycles air and water for the lunar outpost. An architecturally integrated bioregenerative life support system does not only provide for the mere survival of the astronauts, but contributes to a higher level of habitability, enhancing the comfort and psychological well-being of the inhabitants.

The radiation shielding is provided by regolith structure, polymer layers of inflatable membrane and water tanks in critical places.

Project SinterHab was initiated at the International Space University by space architects Tomas Rousek, Katarina Eriksson and Dr. Ondrej Doule in collaboration with Richard Rieber from NASA JPL in 2009. London-based space architect Tomas Rousek, director of A-ETC.net, then carried out an internship with the NASA Habitation team at NASA JPL in Los Angeles where he worked with Scott Howe, a co-author of this 3D printing robotics system. The design of SinterHab was then presented to the scientific community in the leading aerospace journal Acta Astronautica in 2012. Scientists from NASA JPL have used SinterHab as an example in proposal for funding the development of this microwave sintering technology. Sinterhab 2.0 is currently being developed in international collaboration.

The SinterHab construction method is based on the MS-FACS. Scientists at NASA JPL have proposed the Microwave Sinterator Freeform Additive Construction System (MS-FACS), a large six-legged multi-purpose robot called ATHLETE holding microwave printer head that would create walls and domes. The lunar dust would be excavated and manipulated by Chariot rover in bulldozer configuration and then fed to printing head of ATHLETE. This would cover inflated membranes made of multiple layers of Kevlar, Mylar and other materials. The prototype of the ATHLETE robot has been tested in Arizona Desert for various tasks, such as moving habitats and using different tools.

Ing. arch. Tomas Rousek, M.Sc.
London-based space architect Tomas Rousek is CEO at architecture and design company A-ETC.net and architect at AECOM London. He focuses on terrestrial and space architecture and design. He supports long-term sustainability of our civilization in our Galaxy and beyond. He has cooperated with NASA Habitation Team and NASA Media Innovation Team. He got NASA Group Achievement Award for participating in HDU mission. Tomas is a member of the American Institute of Aeronautics and Astronautics Space Architecture Technical Committee. His reasearch ranges from artificial gravity to 3D printing, future architecture and design, BIM and parametric design methods. He is co-founder of non-profit organization Futura Pragensis and presented his work in 16 galleries in Europe and America. Tomas created designs for companies such as Vodafone, Johnnie Walker or Baileys. He has graduated from Masters Studies at the International Space University in France and from Master of Architecture and Urbanism studies at Czech Technical University Prague.

Katarina Eriksson, M.Sc., M.Arch.
Architect Katarina Eriksson has an M.Arch. from the School of Architecture in Lund, Sweden. The studies included courses in aerospace design, partly at NASA, JSC, Houston, and an internship Umbilical Design, a Swedish company focused on space design. The Master project was a conceptual study for a visitor center for Esrange Space Center in Northern Sweden. Katarina has just graduated from Masters Studies at the International Space University, ISU, in France. The program concluded with an internship at NASA Ames, California, where she developed a concept for a Mars base simulation computer game. Currently Katarina is mainly working with graphic design, with the space industry as her main target audience.

In past he led space architecture research and academic activities and chaired the Space and Society department at the International Space University, Strasbourg, France where he also coordinated number of international and interdisciplinary team project. During his doctoral research he performed his internship at NASA Ames Research Center focusing on Martian Base architecture. Dr. Doule is also active in space architecture outreach. Number of his activities is coordinated through a virtual innovation studio and online design platform Space Innovations, v.o.s.