Nissin Foods, the inventor of instant noodles, is celebrating 50 years on the market

A recipe for success since its invention and market relaunch 50 years ago: the authentic Asian Cup Noodles from Nissin 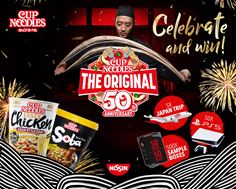 Eschborn, 15 September 2021 – The Japanese company Nissin Foods, the inventor of instant noodles, is celebrating 50 years of releasing Cup Noodles this year on 18 September – and Nissin is joining in on the celebrations in over 100 countries worldwide!

Nissin is looking back at a successful history with its Cup Noodles. Nissin Cup Noodles went on sale on 18 September 1971 and have been an integral part of the product range ever since. In 2003, Cup Noodles reached 20 billion units sold worldwide since their launch. In 2011, the CUPNOODLES MUSEUM opened in Yokohama, Japan. In the following year, the "Soba" products were added to the Cup Noodles range in Europe.

The Cup Noodles Soba range is now worth over £ 16m [1] in the UK in the last 52 weeks. These delicious wok-style noodle pots have convinced consumers, holding the second highest repeat rate in the Pot snacks Category at 52% of repeat buyers. The total Nissin Cup Noodles portfolio has seen an impressive growth of 28.1% retail sales value in the last 52 weeks [2] despite lapping COVID-19 stockpiling effects. To mark its 50th anniversary, Nissin has recorded 50 billion Cup Noodles sold worldwide in 2021.

Each cup of the "Cup Noodles" brand reflects the exciting and flavoursome world of Asian food and noodle culture. The range, which offers ramen-style and wok-style products, brings the authentic Asian taste to consumers in over 100 countries worldwide. With minimal time and effort, they can enjoy a delicious hot meal at home, in the office or on the go.

"In addition to a display and social media campaign, consumers can look forward to a competition with attractive prizes," reveals Olaf Büttner, Managing Director for Germany and Europe. "Since food retail is still our most important sales market, registration for the competition takes place directly at the POS."

"We are celebrating 50 years of popularity with our Cup Noodles, which continue to grow worldwide. Whether wok-style or soup-style - the expertise of Asian noodle production is in every cup," explains Tomomitsu Taue, Marketing Director for Nissin Foods Europe. "We draw on the continued success as motivation to constantly develop ourselves and our Nissin Cup Noodles further. We offer our consumers a real variety of flavour and will continue this trend in the future."

The Cup Noodles are available as Soba (wok style) and Ramen soups (soup style) in the following flavour varieties:

About Nissin
The founder of the Nissin Foods Group, Momofuku Ando, invented the world's first instant noodles, "Chicken Ramen", in Japan in 1958. Cup Noodles from Nissin are now sold in over 100 countries worldwide. With its products, Nissin Food Products Co. Ltd. is the market leader in Japan in the instant noodles category and holds strong market positions in many other countries.

The Nissin Foods Group has set itself the goal of bringing joy and pleasure to consumers' everyday lives with its products and, based on its own image as an "Earth Food Creator", to enrich food culture worldwide with its Japanese influences.