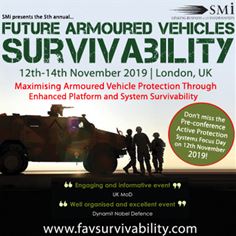 As the only armoured vehicle conference dedicated to the area of survivability, the 2019 event will gather programme managers, capability directors, and commanders from the military, and senior engineers, chief scientists, and platform managers from leading solution providers to discuss what nations are doing to protect their armoured vehicles and their personnel.

Download the brochure for the full agenda, and to find out what else to expect at the conference.

For those who would like to register for the conference, there’s an early bird discount of £300 that will expire on the 28th June 2019, secure your place at www.favsurvivability.com/vuelio.