Animal welfare organization Animals' Angels is releasing its report "100 Reasons to Revise Council Regulation EC 1/2005 on the Protection of Animals during Transport". The report combines Animals' Angels' more than 20 years of experience in animal transport inspections worldwide with the results of scientific studies. In "100 Reasons", Animals' Angels systematically exposes the weaknesses of EU Regulation (EC) No. 1/2005 on the protection of animals during transport and makes over 100 specific demands for the current revision of the Regulation. 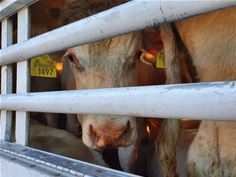 The existing EU laws do not sufficiently protect animals on transport. The biggest shortcoming of the Regulation: no limit on transport time. Its implementation fails on many levels. Despite positive approaches, it fails to significantly reduce animal suffering during transport.

In 22 chapters, Animals' Angels criticizes parts of the Regulation on topics such as transport duration, loading density, fitness for transport, temperature limits, official controls, the sanction system and many more. In addition to scientific evidence, the report draws on countless empirical examples and first-hand information from stakeholders, such as veterinary and police officials, transporters, animal owners and drivers.

Animals' Angels calls for a detailed revision of Regulation (EC) No. 1/2005 ensuring the best possible protection of the transported animals. But the animal welfare organization goes even further: "We need a rethink. The EU treaties recognize animals as sentient beings. The revised regulation on the protection of animals during transport must reflect a morally acceptable way of dealing with animals that respects their lives and suffering as sentient beings. The animals’ lives and welfare must always take precedence over any economic interests", clarifies Julia Havenstein, chairwoman of the association.