Munich, 4 May 2021 – The European Patent Office (EPO) announces that British brothers Ben and Pete Kibel have been nominated as finalists in the “SMEs” category of the European Inventor Award 2021 for their invention of a simple, low-cost device that prevents the accidental deaths of seabirds during longline fishing.

An estimated 300 000 seabirds, including many endangered species of albatross, die annually as marine fishing bycatch. To mitigate the problem and make commercial fishing more targeted and sustainable, engineer Ben and fisheries biologist Pete pooled their skills and resources to develop the Hookpod, a small, reusable device that encapsulates baited hooks until they sink to a depth inaccessible to seabirds. The brothers have established three SMEs to market this device and their other inventions that reduce bycatch in global fisheries. 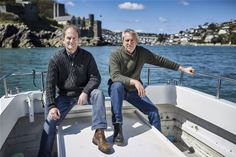 "The Kibel brothers have combined ingenuity with their commitment to the environment to develop a solution that protects vulnerable marine life," said EPO President António Campinos, announcing the European Inventor Award 2021 finalists. "As SME founders they also set an example to new businesses – their patent strategy has enabled them to protect their intellectual property, scale-up production and develop new products."

The winners of the 2021 edition of the EPO's annual innovation prize will be announced at a ceremony starting at 19:00 CEST on 17 June which has this year been reimagined as a digital event for a global audience.

From a love of wildlife to an innovative technical solution
As children, an interest in the wildlife documentaries of renowned British natural history broadcaster Sir David Attenborough instilled in the brothers both a passion for the natural world and concern for the damage inflicted upon it by humans. “His films would often highlight the plight of endangered species,” says Ben Kibel. “We’ve always been very aware that what humans are doing to the planet and to wildlife isn’t sustainable.” As adults, the brothers decided to take action and develop solutions to the problem of marine bycatch – the incidental catching of non-target species, such as dolphins, turtles and seabirds.

Longline fishing, a technique widely used by commercial operators to catch tuna, swordfish and other species in the open sea, involves the use of lines that are tens of kilometres long, carrying thousands of hooks each. It is controversial because large numbers of marine animals other than those targeted are hooked and killed, including an estimated 300 000 seabirds each year. Conservationists are especially concerned about the tens of thousands of albatrosses that die this way annually – the International Union for Conversation of Nature lists most of the 22 species as vulnerable, threatened or endangered.

The brothers focused on using Ben’s engineering expertise to develop a simple but effective mechanical fix. “It would have been easy to develop a sophisticated electronic depth-related system, but that would never have been operationally viable,” says Pete. “The design challenge we faced was in making something that is bulletproof in harsh environments and can be mass produced for just a few dollars.” The Hookpod is a clear, polycarbonate capsule that is clipped over the points and barbs of longline fishing hooks. On the surface, this prevents scavenging seabirds from getting caught on the hooks by physically blocking their access to them. The core of the device is a pressure-operated mechanism that consists of a watertight tube containing a piston and a small quantity of trapped air. Once the encapsulated hook sinks to 20 metres below the surface – out of range for most seabirds – the force generated by the water pressure on the end of the piston becomes greater than the force acting in the opposite direction, driving the piston inwards as a result. The piston continues to move until it releases a latch, which opens the device and releases the baited hook. When the fishing session is complete, fishermen can simply clip the Hookpod shut for subsequent use.

The brothers were granted a European patent for the Hookpod in 2016, which was important in attracting the investment needed to launch and market it. “A patent provides security so that if a funder backs it, they have a time window in which the product can be sold, and they can recover their investment,” says Ben. Moreover, according to Ben and Pete, the device's relative simplicity means their patent is critical to prevent others from copying it. Without patent protection, the brothers say that poor-quality imitations could damage their invention's reputation among longline fishing operators.

Several decades after encouraging the Kibels’ interest and concerns for wildlife, Sir David Attenborough returned their appreciation of his work. Writing about the plight of the albatross in a product endorsement, he said: “Every day, hundreds of albatrosses die in longline fisheries…. If every pelagic longline fishing fleet used Hookpods, I believe we can stop the accidental death of these magnificent ocean wanderers.”

Research published in 2017 compiling the results of 18 sea trials, found that one seabird death occurred per 25 000 hooks using a Hookpod, compared with one per 1 250 hooks without the device – a 95% reduction. No difference was found in target catch rates. If all longline fishing operations globally used the devices, and deaths occurred at the same rate as during those trials, the lives of some 285 000 seabirds could be saved annually.

Small businesses with big environmental ambitions
The Kibel brothers have established a number of SMEs, each providing solutions to improve the sustainability of marine-based industries. They set up their first business, Fishtek Ltd. in 1998, initially using their own money and any time they could spare from their other professions. In 2013, the brothers launched a separate business, Hookpod Ltd. to raise investment and bring the device to market. Since then, they have also launched different versions of the product, including one that uses a built-in LED. This is designed to replace the chemical light sticks which are used to attract fish, but often end up as plastic pollution.

In 2018, the Western Central Pacific Fisheries Commission (WCPFC), which protects highly migratory fish in the region, recognised the brothers’ invention as the world’s first standalone method of reducing accidental seabird deaths. The New Zealand government followed suit in 2019, and New Zealand-based vessels using the device recorded zero bycatch in the first half of 2020. A trial is underway in China, in collaboration with the Paulson Institute and a longline fishing company, to explore the impact of 2 000 Hookpods used by two longline fishing vessels.

Three years after establishing Hookpod Ltd., the brothers launched their third business, Fishtek Marine, to commercialise additional inventions, including a device that emits electric fields to drive sharks, rays and skates away from fishing hooks, and another that uses sound to reduce cetacean bycatch. Following a crowdfunding campaign, Fishtek Marine Ltd. recently raised EUR 1 million to further its research and development, marketing and recruitment.

Notes to the editor

About the inventors
In addition to watching natural history documentaries, Ben Kibel (born in Serowe, Botswana, in 1968) also enjoyed solving technical problems as a child. This evolved into a keen interest in science and engineering, and, in 1992, he founded Eco Electric to use his engineering skills to develop environmentally friendly products, including wind turbine technology. Alongside his brother Pete, Ben went on to set up Fishtek Ltd., in 1998 and Hookpod Ltd. in 2013. In 2016, the brothers set up Fishtek Marine Ltd., as a separate company for their bycatch reduction technologies. Ben is a Director at Hookpod Limited, Fishtek Marine Ltd and Managing Director of Eco Electric Limited.

Childhood sea fishing trips inspired Pete Kibel (born in South Africa in 1966) to become interested in marine conservation. He completed a B.Sc. in Biological Science at Keble College, University of Oxford, and a M.Sc. in Applied Fish Biology at the University of Plymouth. Pete is Managing Director of Fishtek Ltd., a fisheries consultancy and engineering company. He is also Managing Director of Fishtek Marine Ltd., and a Director at Hookpod Ltd.

View the video and photo material for Ben and Pete Kibel: https://www.epo.org/news-events/press/european-inventor-award/2021/kibel.html

About the European Inventor Award
The European Inventor Award is one of Europe's most prestigious innovation prizes. Launched by the EPO in 2006, it honours individual inventors and teams of inventors whose pioneering inventions provide answers to some of the biggest challenges of our times. The finalists and winners are selected by an independent jury consisting of international authorities from the fields of business, politics, science, academia and research who examine the proposals for their contribution towards technical progress, social development, economic prosperity and job creation in Europe. The Award is conferred in five categories (Industry, Research, SMEs, Non-EPO countries and Lifetime achievement). In addition, the public selects the winner of the Popular Prize from among the 15 finalists through online voting.

About the EPO
With 6 400 staff, the European Patent Office (EPO) is one of the largest public service institutions in Europe. Headquartered in Munich with offices in Berlin, Brussels, The Hague and Vienna, the EPO was founded with the aim of strengthening co-operation on patents in Europe. Through the EPO's centralised patent granting procedure, inventors are able to obtain high-quality patent protection in up to 44 countries, covering a market of some 700 million people. The EPO is also the world's leading authority in patent information and patent searching.