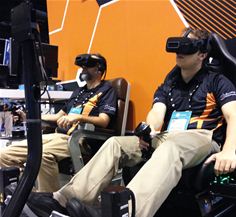 “We sought to leverage emerging VR technology to create a highly realistic yet affordable training solution that was portable enough to be transported for use in an aircraft carrier ready room,” said John Burwell, BISim’s business development director. “The results have exceeded expectations and show that the latest HMD and tracking technology have passed the threshold for widespread usability. Discomfort associated with previous application of VR technologies have been virtually eliminated.”

The F/A-18 avionics, weapon systems and flight model are faithfully simulated by Flex-Air from SA Simulations. The technology is standards-based and integrates with the Next Generation Threat System (NGTS) developed by NAVAIR that models both threat and friendly aircraft, ground and surface platforms, and their corresponding weapons and subsystems. The VR technology, which runs on a COTS high-performance PC, incorporates a flight stick and throttle which serves as the sole physical interface to the system.

The program demonstrates that a wide variety of training requirements can be met with the technology as it is today. If offered as part of a blended learning solution, VR solutions can help to fill gaps between classroom-based instruction and full mission simulation and live training.

BISim recently demonstrated the results of this development project at I/ITSEC 2016 in Orlando and networked it with VBS3 and VBS IG for a complex combined arms training exercise.