London, UK - 26 March, 2012 – NetApp announced the Bomber Command Memorial Appeal as the winner of the NetApp Soldiering On Lifetime Achievement Award at a ceremony last night near London. The award, presented by the Minister for International Security Strategy, Gerald Howarth MP, recognised the individuals who have campaigned for a memorial to RAF Bomber Command and the 55,000 Bomber Command airmen who died during the Second World War. The memorial is set to be unveiled in Green Park, London in June 2012. 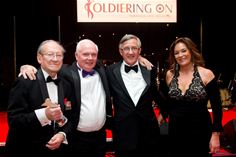 Winners of the NetApp Soldiering On Lifetime Achievement Award

Douglas Radcliffe MBE said, “The Command really was the only Command that was totally involved right throughout the war. It was able to take the fight to the enemy when no one else could… The award that comes to James, Vivienne and myself is shared with many others. It’s been a very, very long time, and we are honoured to be at the hub of it. In June this year we will salute the boys who didn’t make it.”

Registrar Vivienne Hammer said: “When we first started fundraising we were talking about £2million but it just escalated. We are on about £6million at the moment and we’re still fund raising for the maintenance.”

The Soldiering On Awards 2012 took place at the Waldorf-Astoria, Syon Park Hotel to honour military heroes throughout life. An honour guard from the Honourable Artillery Company greeted guests, VIPs, dignitaries and celebrities on arrival, before the evening’s hosts Gloria Hunniford and Mike Read took over. An exceptional auction with items such as Cowes Week sailing and a Spitfire flight followed the moving presentation and dinner. The awards form a core part of the Soldiering On Trust’s programme of special high profile fund raising events.

Dave Allen, managing director of headline sponsor NetApp UK & Ireland, commented, “The Soldiering On Awards are testament to the human spirit. There’s nothing better than seeing people who go beyond, who go the extra mile in any walk of life. This ethos is echoed in the efforts of the Bomber Command Memorial Appeal. The passion and drive of James, Douglas, Vivienne and many others has enabled a fitting memorial to be established. It represents our nation’s appreciation for the sacrifices made by 55,000 Bomber Command personnel during the Second World War. NetApp is honoured to present this award to them.”

All the proceeds raised at the event will go towards supporting those who have served or are serving in the armed forces and have suffered from mental or physical disabilities due to injury. Grants will be given to support individuals or key support organisations, such as the Royal Naval Benevolent Trust, the Royal Navy and Royal Marines Charity, the Soldiers’ Charity, the RAF Benevolent Fund, BLESMA (British Limbless Ex Service Men's Association) and the Bomber Command Memorial appeal.

For more information and to see a video about NetApp’s involvement with the Soldiering On Through Life Trust and the Bomber Command Memorial Appeal please visit the NetAppTVUK YouTube channel.

About the Soldiering on Trust
The Soldiering On Through Life Trust is a charitable trust designed to raise awareness of the plight of our servicemen and women and raise funds for the injured. The ambition of the Trust is to establish a range of high quality events to help raise awareness and funds to support key military charities.