Breuninger appoints managing directors for the Munich and Luxembourg houses

Stuttgart, 1 September 2021 After a successful merger this July, the Stuttgart-based fashion and lifestyle company Breuninger launched the next steps of the integration process for KONEN Bekleidungshaus GmbH & Co. KG. Starting in autumn 2021, the two former KONEN fashion houses in Munich and Luxembourg will be led by newly appointed managing directors. 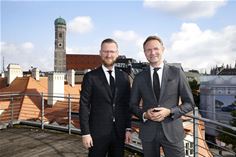 The new team for the acquired houses, Konen Munich and Bram Luxembourg, is beginning to take shape. The two former managing partners of Konen and Bram, Dr Gabriele Castegnaro and Dr Tobias Ponn, who have led the company successfully for many years, are leaving the company as agreed and at their own request. They have both assisted Breuninger in an advisory capacity with the ongoing integration process since the merger on 1 July 2021. Dr Castegnaro and Dr Ponn will now depart the company on 31 August and 30 September 2021, respectively, to take on new challenges for themselves. In this context, corresponding management positions at the houses will be reappointed by Breuninger, the new owner of Konen.

Breuninger CEO Holger Blecker remarks: "We have received fantastic support from Dr Gabriele Castegnaro and Dr Tobias Ponn during the initial weeks of the merger on our way to becoming a Breuninger family. On behalf of the entire Breuninger management, I would like to thank them warmly for their constructive and active assistance in the first phase of the integration process."

From now on the Konen houses in Munich will be managed by the dual leadership of René Weise, formerly head of sales at Konen and Bram, and Alexander Entov, formerly house manager for Breuninger in Freiburg. René Weise has already been fully concentrating on the Munich house since August, and Alexander Entov will join the new management duo in the Bavarian state capital starting 1 October 2021.

"During the current phase of integrating Konen and Bram into the Breuninger company, it is extremely important to develop an attractive joint plan for the future. We have ambitious goals and would like to successfully develop the first-class locations in Munich and Luxembourg in line with these goals so that we can offer our customers a unique multi-channel shopping experience here as well. That's why I'm particularly thrilled that we have been able to appoint a strong and experienced team for the Munich market with René Weise and Alexander Entov, and that we have Kai Neu in charge of the Luxembourg house as a skilled local expert", remarks Breuninger CEO Holger Blecker about the newly appointed team.

E. Breuninger GmbH & Co.
The fashion and lifestyle company Breuninger was founded by Eduard Breuninger in 1881 and is now one of the leading multi-channel department stores in Europe. Over its 140-year history, Breuninger has set high standards for fashion, beauty and lifestyle with an exclusive selection of international designer brands and select newcomer brands. The online shop www.breuninger.com launched in 2008 is one of the most successful online shops in the premium segment and is also available to customers in Austria and Switzerland. Apart from impeccable style and a sense for trends, Breuninger is deeply customer-oriented: Offers such as Special Service, the in-house bespoke atelier, Click&Collect and online reservations, the in-store order service and shuttle service ensure an extraordinary shopping experience, whether online or in person. In Germany and Luxembourg, Breuninger now runs 13 department stores with around 6,000 employees.