SMi reports: British Army, UK MoD and Royal Navy to present at Social Media in the Defence and Military Sector conference in November ahead of deployment of ‘Social Media Warfare’ division

The British Army have announced the formation of a cyber warfare unit to fight "above and below the threshold of conventional conflict". 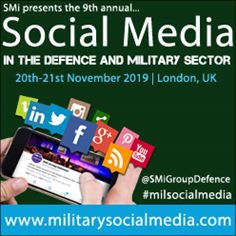 Social Media in the Defence and Military Sector

Learn more at SMi's 9th annual Social Media in the Defence and Military Sector conference, taking place in London on the 20th and 21st November 2019, where leading social media figures from the British Army and UK MoD will present exclusive presentations and provide the latest updates on future developments for the British Armed Forces.

WO2 Paul Barnes, SO3 Media Operations, The British Army who will present ‘Operationalising Social Media’, he will discuss the utility of social media, how social media can change the way wars are fought and case studies from commemoration.

Mr Matthew Clarke, Head of Digital Strategy, UK MoD will present ‘How to be Great at Digital Communications — The MoD’s digital journey’. He will discuss Digital planning and strategy development; Content, distribution and measurement; How to engage with your audience on digital and social; Benchmarking digital performance and What does digital great look like?

Alex Schillemore, Head of Digital, Royal Navy will present ‘Holistic Approach to Digital’. She will discuss Using your website and social media to the greatest effect; Owned vs earned channels; Planning for your audiences and Evaluation.

Download the new brochure to view the full agenda at www.militarysocialmedia.com/vuelio2

The two-day Social Media in the Defence and Military Sectors conference provides the ideal platform to discuss social media strategies, platforms and tools used in the armed forces’ day-to-day activities from branding and recruitment to frontline operations, intelligence, and cyber warfare.

For those who would like to attend the conference a saving of £100 is available for bookings placed before 30th September. Registrations can be made online at www.militarysocialmedia.com/vuelio2

If you would like to showcase your solutions to key decision makers within the industry, contact Sadia Malick on +44 (0) 207 827 6748 or smalick@smi-online.co.uk