The Camping and Caravanning Club, the oldest and largest Club for all forms of camping in the UK, has grown to a membership of 300,000 households for the first time in its long history.

The Club, which was founded in 1901, has grown by more than 5% each year in the last two years alone to reach this landmark figure. And with each household membership including up to two adults plus children, the Club now represents the interests of more than 750,000 campers, caravanners and motorcaravanners in the UK. 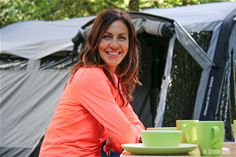 A number of factors have helped contribute to the Club’s ongoing success: these include warm summers in recent years, lower fuel prices and wider range of camping and glamping options, all of which mean the British ‘staycation’ is booming.

In line with these trends, the Club has seen an increase in motorhomers, caravanners and tent campers pitching up on its network of over 100 award-winning Club Sites in 2017, with pitch night sales up 9% year to date compared to 2016.

Robert Louden MBE, the Club’s Director General, said: “Camping has evolved from basic equipment to a lifestyle choice for millions of people. The camping and caravanning sector is thriving, with campsites welcoming more visitors from both the UK and further afield this summer.

“The hard work of everyone involved with The Camping and Caravanning Club to deliver exceptional customer service - from our UK Holiday Site Teams and overseas Rally Stewards, to our army of volunteers and dedicated, friendly staff at Club Headquarters - along with great innovations such as our Digital Membership offering starting at just £38 per year, have all contributed hugely to this success.”

Julia Bradbury, Club President, TV presenter and outdoor enthusiast, said: “I’m thrilled to join in with the celebrations as the Club hits this historic milestone.

“The benefits of camping have remained the same throughout the Club’s history; at a time when more of us are looking to switch off from technology, getting outdoors and spending quality time with friends and family is more important than ever. We’re now a Club of more than 750,000 people, however they choose to camp.”

As a result, the Club’s Temporary Overseas Membership has experienced strong growth this year. It’s available to overseas visitors and includes discounts on Club and Camping in The Forest Sites, and also gives access to smaller, member-only Certificated Sites.

Club membership starts from £38 a year and extends to 2 adults plus children living at the same address. Member benefits include discounts of up to 30% on Club Site camping, family deals, access to a dedicated Travel Service that arranges and books travel for more than 80,000 members each year in Europe and further afield, discounts on ferry crossings, tailor-made insurance products, retail and attraction discounts and much more.

For more information on membership, and to join the Club, visit: www.campingandcaravanningclub.co.uk/jointheclub/.