After cake attack on Mona Lisa: Castello CUBE has to be hidden in a safe in the Swiss Alps!

Zug, Switzerland - It is the most expensive cube ever made, funded by the booming cryptocurrency Castello Coin. For now, the world-famous Castello CUBE will no longer be open to the public – to protect it from damage and theft.

The Castello CUBE attracted worldwide attention when the golden cube by artist Niclas Castello was shown first in New York's Central Park and at the Venice Biennale this year. The work of art, unique in the world, was made of 24 carats, 999.9 fine gold in the oldest art foundry in Europe and weighs 410 lbs. The material value alone is $11.7 Million US-Dollars. Coin and CUBE each act as a bridge between the classic financial world, the world of traditional forms of investment and traditional art and the new world – the world of cryptocurrencies and the digital age. 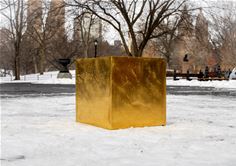 After cake attack on Mona Lisa: Castello CUBE has to be hidden in a safe in the Swiss Alps!

Initially, the Cube was supposed to be shown in other locations in the US, Europe, Asia and the United Arab Emirates and inspire people worldwide. But security experts advise against it after a risk analysis. The reason: Safety cannot be guaranteed. An activist recently daubed a cake on the Mona Lisa in the Louvre in Paris, luckily protected by a pane. However, the Castello CUBE does not come with such a protective pane.

A spokeswoman of Swiss HoGA Capital AG, which is behind Castello CUBE and Castello Coin, says: "It breaks the artist's and our hearts, but we can no longer show the Cube publicly. The work of art lives from the fact that it stands directly and unprotected outside and becomes one with the earth. However, the risk of the Castello CUBE being intentionally damaged or kidnapped is now too big. With its increased popularity, we can no longer provide security and insurance." The Castello CUBE is now hidden in a secret and heavily guarded depot in the Swiss Alps. Only a handful of people know where.

The popular cryptocurrency Castello Coin, which made the creation of the Castello CUBE possible in the first place, is also freely available - never before has a cryptocurrency created such artistic and material value. After listings on Bittrex and BitMart, the LBank is now the third renowned exchange to trade the Castello Coin - as the leading exchange for digital financial investments.

The HoGA spokeswoman adds: "Only through reliability and trust will people's interest in cryptocurrencies continue to rise. In the challenging cryptocurrency market, our obligation is to give interested buyers various user-friendly and highly secure opportunities to trade the Castello Coin. We attach great importance to listings on the leading stock exchanges worldwide."

The Castello Coin is based on the Ethereum blockchain, which has been active since 2015 and is one of the most secure decentralized transaction databases in the world. The Castello Coin is supported by an international team of consultants from the areas of blockchain and finance: This also includes a close partnership with a Swiss bank. The coin was developed by DSENT AG, which offers the highest level of security, transparency and regulation.

Please send your request to: press@castellocube.com