Country Queen, which premiered in 190 countries exclusively on Netflix 15th of July, is the first high-quality drama series from East Africa to reach a global audience! Launching as No. 1 TV Show in Kenya on Netflix for two weeks in a row, the series continues to gain stellar reviews, more traction and global recognition. 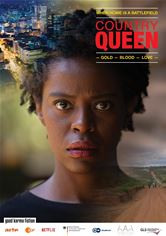 When death awakens a sleepy village, its past threatens to haunt the present.

Berlin - COUNTRY QUEEN is a family drama series set in contemporary Kenya. The new, original drama series, first out of Kenya, is adding to the growing list of dynamic African content. The past and present collide in this David vs. Goliath story when a mining company threatens to destroy the rural home of AKISA MUTUNGA, an ambitious event planner, who is pitted against a deadly businesswoman, whose husband she is entangled with. Akisa finds herself in the midst of a love triangle, as she struggles to find her place in life by finding her true love and lost son.

Issues of land grabbing and exploitation form the tapestry against which the fractured personal lives and relationships of Country Queen's main characters play out. The fight for land becomes a fight for redemption and truth. The characters have to face the consequences of their own choices. The fictional story carries many elements of truth that speak to a range of issues such as family disputes, land ownership and exploitation that affect millions of people in Africa and worldwide.