At the age of 16, Kamkar dropped out of high school and one year later, co-founded Fonality, a unified communications company based on open source software, which raised over $46 million in private funding. His work has been cited by the NSA, triggered hearings on Capitol Hill, and has been the basis for security advancements across virtually all major web browsers, smartphones, and other technologies. 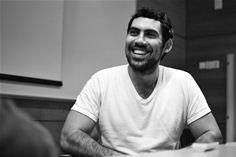 He is best known for creating and releasing the fastest spreading virus of all time, the MySpace worm "Samy", and being subsequently raided for it by the United States Secret Service. After accepting a plea bargain, Kamkar was allowed to keep a single un-networked computer, but explicitly prohibited from any internet access during his 3 year probation.

He is also the creator of SkyJack, a custom drone which hacks into any nearby Parrot drones allowing them to be controlled by its operator, and for creating the Evercookie, which appeared in a top-secret NSA document revealed by Edward Snowden and on the front page of The New York Times. On top of all this, he also worked with The Wall Street Journal and discovered the illicit mobile phone tracking where the Apple iPhone, Google Android and Microsoft Windows Phone mobile devices transmit GPS and Wi-Fi information to their parent companies. His mobile research led to a series of class-action lawsuits against the companies and a privacy hearing in the US.

At IP EXPO Nordic, Samy Kamkar will be doing a live hack where he can actually manipulate the audience's mobile phones and will then demonstrate how he did it, how it works and how to prevent it.

Known as a privacy and security researcher, computer hacker, whistle-blower and entrepreneur - Samy Kamkar is the ultimate genius when it comes to cyber security and how to break into things. This is your chance to see him live onstage at IP EXPO Nordic and witness his hacking skill in person.

For further information and to find out when registration opens, please visit: www.ipexponordic.com. Take part in the LinkedIn group and stay up to date.

About IP EXPO Nordic
IP EXPO Nordic is the Nordic’s number one enterprise IT conference and part of the IP EXPO event series. The event series also includes IP EXPO Europe in London and IP EXPO Manchester in the UK. Launched by organisers Imago Techmedia in 2016, the event now encompasses six events under one roof including Cloud & IoT, Cyber Security, Networks and Infrastructure, Data & Analytics, DevOps, and a brand new topic emerging at the forefront of technology, AI. Designed for those looking to find out how the latest IT innovations can drive and support their business and transition to a digital future.

The events showcases brand new exclusive content and senior level insights from across the industry, as well as unveiling the latest developments in IT. It covers everything you need to run a successful enterprise or organisation.