DevOps adoption accelerates but laggards risk being left behind, according to new Redgate research

Cambridge UK, Thursday, January 11, 2018 – Organizations are increasingly turning to DevOps within their development and database teams according to the 2018 State of Database DevOps Survey, conducted by Redgate Software with SQL Server professionals. 82% of the 700 organizations surveyed say they have either already adopted DevOps or plan to do so in the next two years, up from 80% in 2017. Over half (52%) have already implemented DevOps process on some or all of their projects, a jump from 47% last year. 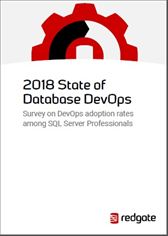 However, a significant number of laggards are turning their backs on DevOps. While 60% of respondents in the retail and IT Services industries are already using DevOps, less than 40% of those in the government/education and not-for-profit sectors have adopted it – and over a third (36%) say they have no plans to implement DevOps within the next two years.

The research also pinpoints the benefits that DevOps is delivering. 63% of those surveyed feel that DevOps has a positive impact on regulatory and compliance requirements – a vital issue given the forthcoming EU General Data Protection Regulation (GDPR), with its May 25 2018 deadline. This rises to 69% among those who have already adopted DevOps – showing that the further down the implementation path organizations are, the greater the compliance benefits.

Databases are increasingly central to business operations, with over a third (35%) of organizations deploying database changes either daily or more than once a week. This is reflected in the key benefits that respondents see from adopting database DevOps – 28% say that increasing speed of delivery is the biggest advantage, up from 26% in 2017, followed by freeing up developers and allowing them to handle more added value work. This is cited by 23% of people in 2018, a big jump from last year’s figure of 17%.

Skills shortages are the biggest challenge to successfully adopting DevOps, identified by 24% of respondents, followed by disruption to existing workflows and the business (20%). The survey found that DevOps is increasingly seen as a business priority – just 12% cite lack of awareness of the business benefits as the main obstacle to adoption, a fall of a third from 17% in 2017. However, 40% of the laggards who have no plans to adopt DevOps blame a lack of awareness of the business benefits as their main challenge, demonstrating a need to educate management on the advantages that DevOps brings.

Commenting on the findings, Mary Robbins, Redgate Product Marketing Manager, says: “It’s heartening to see how DevOps adoption is accelerating, with organizations moving forward significantly since our last research a year ago. This is changing the challenges they face – having demonstrated the business benefits of database DevOps, organizations are now looking to overcome implementation challenges, such as skills gaps and changing how they operate. However, while the majority are pushing forward with DevOps, a significant proportion risk being left behind, missing out on the advantages this new way of working delivers in an increasingly data-driven world.”

The survey also found that traditional barriers between developers and database administrators (DBAs) are breaking down, a key cultural requirement for DevOps to succeed. 58% of organizations say that collaboration between these teams is either good or great, rising to 68% amongst those who have already adopted DevOps. Over three quarters (76%) of teams have developers who are responsible for both database and application development, showing an increasingly collaborative approach. 75% say developers typically build database deployment scripts, with this group responsible for deploying database changes to production in 47% of organizations.

The key challenges to integrating the database into DevOps remain similar to 2017, with nearly a third (31%) citing synchronizing application and database changes as the biggest issue, followed by overcoming different development approaches (23%).

Demonstrating the close relationship between databases and development, two thirds (67%) use production data in their development, test or QA environments. This use of ‘real’ data helps speed development, but also brings compliance and privacy concerns. 57% of respondents recognize that data will need to be modified or masked before being used in non-production environments.

Mary Robbins concludes: “To realize the full benefits of DevOps, it’s vital to incorporate the database. This can be a longer term process, but standardizing practices and tools, and ensuring that production data is masked to protect privacy are the first steps to delivering end-to-end DevOps workflows. Given the momentum between 2017 and 2018 we expect this integration between teams and tools to take another step forward over the next 12 months.”

The 2018 State of Database DevOps Survey was based on a survey of 700 SQL Server professionals from around the world. 57% were based in North America, with 27% in Europe. In terms of size, there was an equal split between organizations employing up to/over 500 staff, with 14% of respondents working for companies with 10,000+ employees.

About Redgate
Redgate makes ingeniously simple software used by over 800,000 IT professionals, and is the leading Microsoft SQL Server tools vendor. Redgate's philosophy is to design highly usable, reliable tools which elegantly solve the problems developers and DBAs face every day, and help them to adopt database DevOps. As a result, more than 100,000 companies use products in the Redgate SQL Toolbelt, including 91% of those in the Fortune 100.