Dresden's application for the title "European Capital of Culture 2025" given a motto: Neue Heimat

"Dresden has always been a cultural hotspot, thanks to internationally famous landmarks like the Semperoper or the Frauenkirche," says Mayor Dirk Hilbert about the bid, due to be submitted on 30 September. "However, that alone is not enough. We believe that earning the title calls for more than simply showcasing what you already have." The application motto Neue Heimat Dresden 2025 reflects this approach. "Europe is divided. Issues related to migration and immigration or national identity have led to schisms. Because of this, we want everyone to become active in redefining our city and the concept of home." 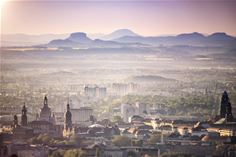 Dresden’s application for the title

Curator Michael Schindhelm explains: "A European Capital of Culture programme should not simply be developed by a small circle of experts but by the entire local population. Culture consumers therefore become creators and contributors, bringing to the programme their varying biographies and social experiences." Half of the projects will be initiated by Dresden's citizens "via platforms that allow various partners, Dresden's citizens, and experts to network," says Schindhelm.

Dresden also intends to include projects with its partner cities Coventry and St Petersburg. Hilbert: "In 2025, neither of them will be in the EU but they will still belong to Europe. Dresden views itself as a hub between East and West, and as the future interface between cultures." An exhibition at the Deutsches Hygiene-Museum will focus on all facets of the bid from 11 October 2019 onwards.

In the event of a successful bid, Dresden's planned budget amounts to 70 million euros. The decision as to which of the German cities that have applied will bear the title in 2025 will be made at the end of 2020.