Eating disorders education hub to be launched
‘There is a glaring gap where treatment of eating disorders should be in the UK. I know, as I loved exercise too much, combined it with under-eating, and lost the ability to perform for the last three years and jeopardised my health into the bargain. I wouldn’t have done that if awareness, education, and support had been better’, says Jenny Tomei, formerly anorexic and now Founder of the Jenup Community Hub. The not-for-profit hub will give teachers, parents, and young people the education, tools and support they need to identify and prevent eating disorders before they escalate and become serious.

Crowdfunding first
For the Jenup Hub to start in earnest, it needs funds and London borough of Bromley-based Jenny has paired up with former cyclist, Northamptonshire-based Sam Woodfield, to crowdfund, aiming for £3000 via a special fitness challenge, mirroring cycling’s Red Bull time laps challenge. These involve teams of cyclists cycling for 25 hours. This challenge is just being tackled by a team of two, Sam and Jenny. Sam will be starting out at 10:45am on Saturday 29th October at Oundle Cemetery and will finish 25 hours later at 10:45am on Sunday 30th in the same location. Sam's personal goal is to cover over 700km within 25 hours. At 1am on Sunday morning, when the clocks go back, the distance covered in the next hour will be doubled, as per the power hour at the Red Bull laps event. Jenny intends to assist Sam by adding to his distance, with their team goal being over 750km. Jenny will do her share by foot and bike, but she has to be more careful, given that not long ago she almost broke due to her own eating disorder. 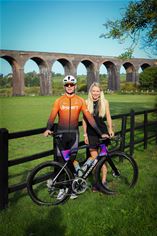 Although he is now able now to take on the bulk of the challenge, Sam too has also been through extreme physical and mental health challenges, which led to his support for the initiative. At one point, already-fit Sam lost a third of his bodyweight in a year, leading to profound consequences then reported on by the BBC. Sam is an ex sufferer of anorexia and orthorexia, which is an obsession with clean eating. See www.bbc.co.uk/news/health-46469538.

Jenny says, “I have a long history of over exercising and under eating. This had detrimental effects to my hormones and my digestive system. I suffered with a condition called intestinal permeability, which can be seen in athletes who over train and who are under-fuelled. Mine was rather serious and my body just basically said NO! I couldn’t even run for a mile without my stomach becoming inflamed due to high levels of inflammation and imbalances in the gut. I had used exercise as a way to navigate grief and painful emotions, and I certainly learnt my lesson. I had to drop out of competitions, my running club, because my body just hit breaking point, and it’s taken me this long to make a comeback. Now, after three years I am able to run 10km again without being in pain or discomfort. Although I abused exercise for so long, I now exercise for my mental health. My passion is to spread more awareness about the side effects of over exercising and under eating on our overall health.

“That is why I am founding Jenup, to support schools and parents with an education hub on eating disorders, sharing how to spot the early signs, and to provide education on nutrition and body image. It’s been a roller-coaster journey, full of ups and downs. And I know there were times when I felt very much on my own with it all. The more we can come together and share what we’ve learnt, the better we can lift young people out of their isolation, and out of those negative cycles that don’t serve them.”

The hub will give teachers, parents and young people the education, tools and support they need to identify and prevent eating disorders before they escalate and become serious. The hub will offer educational materials on eating disorders, early intervention and prevention practices, body image, nutrition, sports nutrition, emotional resilience, and fitness. Recognising the financial constraints that have created this gap, the intention is also to help sponsor selected schools to have access to the hub without charge. The initial priority will be to work with schools where Jenny is located, in the London borough of Bromley.