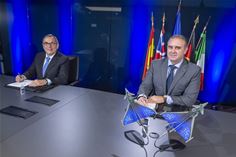 The contract, signed in Munich, between General Miguel Ángel Martín Pérez, General Manager of NETMA, and Gerhard Bähr, CEO of EUROJET, covers EJ200 engines for a new order of Tranche 4 Typhoon fighter aircraft. Production of the engine modules will be carried out locally by the four partner companies of the EUROJET consortium; Rolls-Royce, MTU Aero Engines, ITP Aero and Avio Aero. As partner for the German Air Force, final assembly of the engines will take place at MTU Aero Engines with deliveries to the German customer scheduled to begin in 2023.

Commenting on the finalisation of the contract Mr Bähr stated: “This contract signature is a clear statement of confidence in the platform and of the performance and sustainability of the EJ200 engines which power it. In addition, it also demonstrates a high level of confidence in the consortium and its European industrial base, and will secure highly skilled workplaces in the aerospace industry in the coming years.”

ABOUT EUROJET:
The EUROJET consortium is responsible for the management of the EJ200 engine programme. EUROJET’s shareholders comprise Rolls-Royce (UK), MTU Aero Engines (Germany), ITP Aero (Spain) and Avio Aero (Italy). The engine represents outstanding and innovative technology and continually demonstrates its exceptional performance in the Eurofighter Typhoon. With its unprecedented performance record, combined with multi-role capability and highest availability at competitive life-cycle costs, the EJ200 engine is perfectly set to meet air force requirements, both of today and the future.

Since delivery of the first production engine in 2003, well over a thousand EJ200 production engines have been delivered to Air Force customer fleets of nine nations, and the EJ200 engine has achieved in excess of 1 million engine flying hours.

High Resolution images of the EJ200 can be downloaded from: http://www.eurojet.de/media