9 December 2021, London: A new research report from Culture Amp, an employee experience platform, reveals that company workforces’ overall confidence as well as employees’ belief in their leaders are the biggest differentiators when it comes to achieving sustained stock price increases between July 2020 and June 2021. 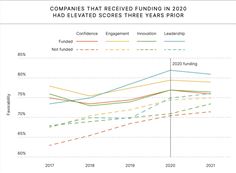 Recognising that the strategy, culture and mindset that takes a company from Seed to Series A funding is not the same as that needed for a later-stage company, Culture Amp explored a number of data sets to test its hypotheses.

This included 1275 venture-backed or public organisations which had either successfully or unsuccessfully secured funding.

Of the 274 of those companies that were publicly listed, there was a 9% difference in confidence in the company vision from employees whose organisations were outperforming others in the top third of the stock market (76%) compared to those employed by organisations underperforming in the bottom third of the market (67%).

Additionally, 76% of employees working with organisations at the top third of the stock market believed in their leaders compared to 67% of those employed in the lower third of the scale.

In contrast, achieving a positive work-life balance for employees had the least impact on companies’ share price success, with organisations at both ends of the performance scale scoring the same - 78%.

The findings also showed that organisations which received VC funding had employees with high levels of engagement (80% for funded, 74% at unfunded); confidence in the company (77% funded, 71%; unfunded); a belief in their leaders (82% funded; 75% unfunded) and sense that there is a culture of innovation (77% funded, 71% unfunded).

Significantly, it also showed that companies displayed elevated levels for these four factors as early as three years prior to successfully securing funding.

Kevin Diestel, partner, Sapphire Ventures, says: “Great companies require visionary products and iconic leaders. Equally as important, and increasingly a top priority for business around the world, is an emphasis on teams and culture, which ultimately determine the success of a business. A company’s culture is key to ensuring employees’ voices are front and centre. And when employees are heard, they help deliver sustained business growth and resilience. As more and more companies prioritize culture, it has become a critical benchmark of an organisation’s management strength, strategic direction and ability to thrive in the long-term.”

Fresia Jackson, lead people scientist, Culture Amp adds: “Many leaders still see a positive work culture as a nice-to-have, and a coincidental by-product of organisational success. However, this research demonstrates that employee perceptions of culture actually precede company growth and profit. We can confidently say that in the organisations we work with, culture actually drives the bottom line, rather than the other way around. Given the time-frame of this research, this has been true before COVID-19, during COVID-19, and beyond.”

Culture Crunch: Top Trends Throughout the Company Lifecycle can be viewed in full here: https://www.cultureamp.com/culture-crunch-company-lifecycle-report

NOTES TO EDITORS
This research compared the employee engagement survey results of almost 4000 Culture Amp customers ranging in company size and funding stage, collected between January 2017 and July 2021. These data were supplemented with publicly available stock market information, and company growth was inferred by employee headcount.

About Culture Amp
Culture Amp revolutionises how over 25 million employees across 4,000 companies create a better world of work. As the global platform leader for employee experience, Culture Amp empowers companies of all sizes and industries to transform employee engagement, develop high performing teams, and retain talent via cutting-edge research, powerful technology, and the largest employee dataset in the world. The most innovative companies across the globe, such as Salesforce, Unilever, PwC, KIND, SoulCycle, and BigCommerce depend on Culture Amp everyday.

Learn more about how Culture Amp can help create a better world of work at cultureamp.com.