New service for the media: with EUrVOTE, the European Parliament makes available information packages about the European elections

From May 23 to 26, some 400 million people in 27 EU member countries can take an active part in shaping the future of the European Union and cast their votes in the European elections. On assignment from the European Parliament, the dpa subsidiary news aktuell, under the press portal URL http://EUrVOTE.eu, in the weeks ahead will be making information packages for use by the media available free of charge. The spot news, background reports and interactive graphics were produced by dpa-Custom Content and can be used by the media for their news coverage.

Why is the EU important and how does it affect its citizens? EUrVOTE provides answers. Starting with the first themed packages in February, the offering will be expanded with new content at regular intervals through May. Each package consists of dpa texts and photos, accompanied by interactive graphics from dpa-infocom that illustrate specific issues and aspects and offer vital added value to editorial staffs. 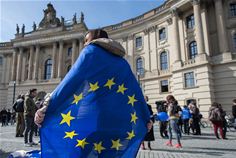 Elections in figures: In the run-up to the European elections the service will be expanded with a number of elements from dpa-ElectionsLive with opinion surveys from all EU member states. As soon as the first vote projections appear, the widgets will show all the results from the individual member states and the distribution of seats in the new EU Parliament. dpa-ElectionsLive visually illustrates the latest data in real time. Media may likewise incorporate this content in their internet services.

About Custom Content:
dpa-Custom Content (dpa-CC) is an On-Demand editorial desk of Deutsche Presse-Agentur (German Press Agency), Germany's largest news agency. The corporate publishing and con-tent marketing unit stands for the established diligence and precision of dpa – coupled with comprehensive resources with regards to texts, photos, graphics, audio and video content as well as the agency's worldwide network. From printed communication materials all the way to newsletters and website content, we provide custom-made creative and content services on the basis of briefings and concepts that we develop for clients. dpa-CC works for companies, government ministries, media and associations.

About infocom:
dpa-infocom is a 100 per cent-owned subsidiary of dpa and specializes in innovative multi-media information services. dpa-infocom develops, carries out and operates tailor-made content and solutions for online, mobile and print outlets. Serving as a bridge between editorial staffs and technology, dpa-infocom connects the basic formats of the dpa group with multi-media "ready-to-publish" products. Sports data content and high-value interactive graphics round out the portfolio.

About dpa:
The Deutsche Presse-Agentur (German Press Agency) dpa was founded in 1949 and belongs among the world's leading independent news agencies. dpa supplies media, companies and organizations with editorial services. These include texts, photos, video, graphics, radio features and other formats. As an agency operating internationally, dpa reports in four languages – German, English, Spanish and Arabic. Around 1,000 journalists work for dpa in more than 160 locations both in Germany and abroad. The owners are 180 German media companies. The editorial desk operates under the basic principles laid down in the dpa statutes: independent of ideologies, business enterprises and governments. The central news office led by Editor-in-Chief Sven Gösmann is located in Berlin. The business management led by President and Chief Executive Officer Peter Kropsch works at the company headquarters in Hamburg. Chairman of the Board of Supervisors is David Brandstätter of the Main-Post GmbH company in Würzburg.