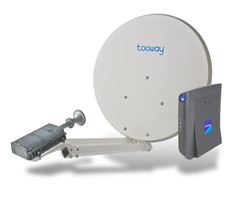 Eutelsat’s high-capacity all Ka-band system, combining satellite and on-ground infrastructure, opens a new chapter in the market for satellite-based IP services. As a powerful new platform for delivering high-bandwidth services to users beyond range of terrestrial networks, it can deliver cost-effective and competitive solutions that contribute to building inclusive digital economies across Europe and the Mediterranean Basin.

Michel de Rosen, Eutelsat CEO commented on the entry into service: “The entry into service of KA-SAT, the world’s most powerful spotbeam satellite, turns a new page in affordable and immediately available IP solutions, and places Europe at the forefront of high-capacity satellite technologies that can serve to quickly close the broadband gap. We look forward to working with our service and technology partners to unleash the huge potential of this new pan-European wireless infrastructure.”

Up to 10 Mbps immediately available for consumers irrespective of location
The new-generation Tooway™ system now running through KA-SAT, and shown live today in locations from Dublin to Athens, is a cost-effective and immediate response to users waiting to access the benefits of broadband irrespective of their location. Europe’s broadband map* shows that at least 13 million households are still beyond range of ADSL, and 17 million access the Internet at speeds below 2 Mbps, which closes the door to many media-rich applications that users today expect to use on a daily basis.

Operated by Eutelsat’s Skylogic affiliate, Tooway™ can provide homes with an always-on service delivering speeds of up to 10 Mbps downstream and 4 Mbps upstream. The customer equipment comprises a small satellite dish (77 cm) and a sleek modem, which is connected to a PC or Mac via an Ethernet connection. Customers can select professional or self installation. The equipment is installed by pointing the dish to 9° East using an included sound beeper and following indications on-screen to activate the modem. The Tooway™ system can also be used for Voice over IP and IPTV. With a dual-feed (Ku-Ka), Direct-to-Home reception of television channels from adjacent broadcast satellites is also possible.

Tooway™ consumer service packages
Skylogic is now offering Tooway™ in four standardised classes with speeds and volumes adapted to user needs, ranging from part-time surfing to intensive home working. Prices are set and commercialised to end users by Tooway™ distributors, with service available from 1 euro per day. More information on the distributor network is available on www.tooway.com.

High throughput capability for professional applications
KA-SAT will also respond to professional requirements for higher bandwidth and/or higher quality services for applications including private networks, broadband access for businesses and institutions, back-up services and remote monitoring (SCADA). For this type of use, the Tooway™ terminal can deliver speeds of up to 40 Mbps downstream and 10 Mbps upstream. An advanced system, which will shortly be available, will increase speeds to 50 Mbps downstream and 20 Mbps upstream.

KA-SAT’s high throughput Ka-band capability also opens opportunities for cost effective Satellite News Gathering, including in HD, using lightweight easily transportable uplink antennas connected to the basic Tooway™ modem. Broadcasters and news agencies will be able to automatically schedule and book capacity via an Internet-based schedule. Broadcasters and video service providers can also take advantage of the spotbeam coverage of the KA-SAT satellite architecture to deliver content in a single beam or multiple beams for regional and local television and corporate TV networks.

KA-SAT – pioneering a new generation of multi-spotbeam satellite for Europe
Built for Eutelsat by Astrium, KA-SAT ushers in a new generation of multi-spotbeam high-capacity satellites. Its revolutionary concept is based on a payload with 82 narrow spotbeams connected to 10 ground stations. This configuration enables frequencies to be reused 20 times and takes total throughput to beyond 70 Gbps. The ground network uses ViaSat’s SurfBeam® 2 technology, an advanced version of the technology already powering broadband connectivity for 500,000 satellite homes in North America. The combination of KA-SAT’s exceptional capacity and SurfBeam® 2 will make it possible to deliver Internet connectivity at speeds comparable to ADSL for more than one million homes in Europe and large parts of the Mediterranean Basin.

About Skylogic
Skylogic provides satellite broadband communications services for Internet access (via IP protocol) and for television transmissions to corporate enterprises and public bodies. The Turin-based company is a subsidiary of Eutelsat. SkyPark, Skylogic’s teleport, houses one of the largest platforms in the world for two-way broadband IP transmissions. Skylogic’s satellite networks are interconnected by optic fibre to the largest operators in the sector, guaranteeing connectivity in Europe, the Mediterranean Basin, the Middle East, North Africa and America.

About Eutelsat Communications
Eutelsat Communications (Euronext Paris: ETL, ISIN code: FR0010221234) is the holding company of Eutelsat S.A. With capacity commercialised on 27 satellites that provide coverage over the entire European continent, as well as the Middle East, Africa, India and significant parts of Asia and the Americas, Eutelsat is one of the world's three leading satellite operators in terms of revenues. At March 31, 2011, Eutelsat’s satellites were broadcasting more than 3,800 television channels to over 200 million cable and satellite homes in Europe, the Middle East and Africa. The Group’s satellites also serve a wide range of fixed and mobile telecommunications services, TV contribution markets, corporate networks, and broadband markets for Internet Service Providers and for transport, maritime and in-flight markets. Eutelsat's broadband subsidiary, Skylogic, markets and operates access to high speed Internet services through teleports in France and Italy that serve enterprises, local communities, government agencies and aid organisations in Europe, Africa, Asia and the Americas. Headquartered in Paris, Eutelsat and its subsidiaries employ 700 commercial, technical and operational employees from 28 countries.