Aachen, Germany, August 2020 - FEV, a leader in the development of battery systems, has developed a novel simulation and testing process for the optimization of thermal propagation in automotive battery packs. This process helps reducing the risk of injury and damage from battery cell thermal runaway.

Thermal runaway is a key safety aspect for hybrid- and electric-vehicles. In January 2021, China will issue the first thermal propagation regulation. It requires a minimum of five minutes of warning for passengers before fire from a thermal event extends beyond the battery or venting gas enters the cabin. 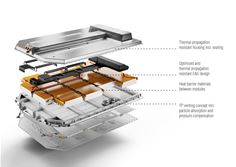 FEV has developed simulation techniques in combination with a cascaded testing approach to optimize automotive battery packs to prevent thermal propagation and the risk of thermal runaway. The company has created two models for this purpose. Multiphysics simulation is used to produce a model to optimize thermal runaway of one cell, propagation between battery cells, and between battery modules. This allows for design optimization and introduction of heat barriers. In parallel, via a fluid-based venting gas model the design of the venting paths, dimensioning of venting valves and the indication of critical busbar routing inside the battery pack are assessed.

Each model is validated further using physical test data. This approach is based on a step-by-step validation of cell to module to pack evaluating the thermal propagation behavior.

After the validation, the two models are combined to create a comprehensive coupled model, containing the thermal battery model, local heat transfer coefficients and fluid/gas temperatures from the venting gas model. This combined model can be used for even more accurate and detailed simulation, which allows for a performance assessment and selection of optimized design parameters and variations. Finally, the design is tested and validated as a complete battery pack.