7 June, 2012, London, UK – The volume of Facebook and Twitter shares a web page generates is closely correlated with how high it ranks in Google UK searches, while too many ads on a page are likely to be having a negative effect on search visibility. But top brand websites appear to have a natural advantage for ranking highly. 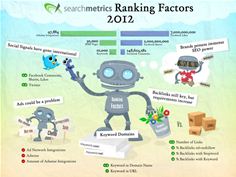 The findings come from a study by search and social analytics company, Searchmetrics, which was aimed at identifying the key factors that help web pages rank well in Google UK searches. The company analysed search results from Google.co.uk for 10,000 popular-keywords and 300,000 websites in order to pick out the issues that correlate[1] with a high Google ranking.

Five key findings of the study are:

1. Social media has arrived in search
Social signals from Facebook, Twitter and Google+ now correlate very strongly with good rankings in Google's UK index. The number of Facebook 'shares' a web page has received appears to have the strongest association (a correlation of 0.35), even higher than the total value for shares, comments and 'likes' together (0.34). Twitter is behind Facebook but is still the 6th strongest factor on Searchmetrics’ list of Google ranking factors (see chart underneath) with a correlation of 0.24.

Searchmetrics found that the number of Google +1 recommendations pages achieve on the Google+ social network had a correlation of 0.37 with search rankings - the strongest correlation of any of the metrics analysed in the study. But the company wants this finding to be treated with caution as Marcus Tober, CTO and founder of Searchmetrics explained:

“Google+ does not currently have enough users for us to be totally confident about this finding. But it’s indisputable that Google is trying to make Google+ an important player in most things it now does. So search and digital marketers should be sure to keep an eye on further developments.”

2. Top brands appear to have a ranking advantage
Despite the perception of search as a level playing field, the study found that top brand websites seem to be enjoying a ranking advantage. Factors that are commonly believed to help web pages rank well, such as the quantity of text on a web page and having keywords in headlines and titles, don’t seem to be required in the case of large, well known brands.

“Surprisingly, the data shows a negative correlation between these factors and rankings - contradicting traditional SEO theory. So not having keywords in headlines or having less text on a page seems to be associated with sites that rank higher,” explained Tober.

“When we looked deeper at the top 30 results we found that this pattern really starts to emerge with highly ranked pages. And when we looked at sites that are in the top position on page one of Google - the natural position occupied by brands – this is where the negative correlation is strongest. This indicates that strong brands rank highly even without perfectly conforming to common SEO practice.”

3. Too much advertising is a handicap
Too many and/or excessively clumsy advertisements were presumed to be a factor in the Google Panda Update and its successors which have tried to lower the search visibility of poor quality results. The data in this study supports this assumption as all the analysed advertisement factors returned a negative correlation (-0.05):

A deeper analysis revealed that this pattern was strongest when there was a high percentage of Google AdSense ads; rankings for pages with more AdSense ad blocks seem to drop sharply. This supports Google’s statements early in 2012, in which the company said that particularly prominent, distracting or above-the-fold ads could lead to ranking problems.

4. Quantity of links is still important but quality is vital
The number of backlinks (links to a web site from other sites) is still one of the most powerful factors in predicting Google rankings (with a correlation of +0.34). To get the most benefit, however, it appears a site needs to have a spread of links that looks natural - not like it was artificially created by SEO experts.

This means that a site should not simply have a large number of perfectly optimised links that include all the keywords it wants to rank for in the anchor text. It needs to have a proportion of ‘no follow’ links (links which do not convey ranking benefits) and links that contain ‘stopwords’ (such as ‘here’, ‘go’, ‘this’).

5. Keyword domains still frequently attract top results:
Despite all the rumours to the contrary, web sites with keywords in the domain name, such as CheapFlights.co.uk , still often top the rankings (correlation of +0.11). Although Google has repeatedly said that keyword domain sites will slowly weaken in power in searches, this does not yet seem to be the case.

“We collated the data for our research in February and March 2012, meaning it takes into account the impact of Google’s various Panda algorithm updates that have greatly changed the look of search results since early 2011. We conducted similar studies in USA, Germany, France, Spain and Italy and found very similar results across the board, which seem to show that these findings apply internationally,” explained Tober.

He added however, that while Searchmetrics’ study highlighted those factors that correlate with a high Google ranking, this does not mean those factors definitively cause or influence the ranking:

“Of course, only Google knows for sure as they control how the search algorithm actually behaves,” he said.

A comprehensive report which outlines the UK results from Searchmetrics’ ranking factors study can be downloaded here.

About the Searchmetrics Study
The study analysed Google.co.uk search results for 10,000 keywords and 300,000 web sites, as well as billions backlinks, Tweets, Google +1s and Facebook likes, shares and comments. The data was collected in February and March 2012. The correlations between different factors and the Google search results were calculated using Spearman's rank correlation coefficient.

About Searchmetrics
Searchmetrics is the global expert in search and social analytics software, empowering marketers to increase visibility and market share on the world’s leading search engines. We create value by providing the best quality data on a global scale. Clients and partners worldwide rely on Searchmetrics to maximize return from search investments with actionable insights that help better manage, improve and scale search marketing campaigns

Searchmetrics’ robust search marketing tool, Searchmetrics Suite, is supported by a unique server infrastructure that offers monitoring of over 100 search engines in over 30 countries worldwide. Searchmetrics Suite is also home to the Searchmetrics Essentials data modules, SEO+SEM and Social, encompassing the largest, fastest databases for search and social media available.

Headquartered in Berlin, with subsidiaries and offices in New York, London and Paris, the company delivers real web intelligence to a growing international customer base. In 2011 Searchmetrics was named as Best Technology Partner, EMEA by Adobe and is listed in the 2012 Always-On Media 100 companies. You can follow Searchmetrics on Twitter @Searchmetrics or on Facebook at www.facebook.com/Searchmetrics. For more information, please visit: www.searchmetrics.com