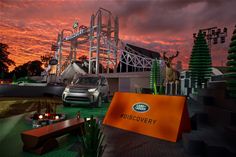 The New Discovery embodies Land Rover’s drive to go Above and Beyond, combining British desirability with an unstoppable spirit of adventure. It is highly desirable with unrivalled capability and technology like no other.

Everyday ingenuity has been at the heart of the Discovery for the last 27 years, with more than 1.2 million customers to date. The new Discovery is for the digital age. Ingenious technology keeps your family safe, connected and confident on all surfaces, all terrains and in all weathers to ensure your destination is reached.

The fifth-generation model benefits from Land Rover’s strong, safe and light full-size SUV architecture, delivering comfort and adaptability like no other.

The reveal set was made from 5,805,846 individual LEGO bricks, breaking the previous Guinness World Record by 470,646 pieces. Laid end to end, the bricks would stretch for almost 200 miles, or from Tower Bridge in London to Paris.

Led by the UK’s only LEGO Certified Professional, Duncan Titmarsh, it took five months for expert LEGO Master Builders in the UK to construct the incredible Tower Bridge structure. It was erected in the grounds of Packington Hall, Warwickshire, UK – close to Land Rover’s Solihull plant, where New Discovery will be produced.

As part of the dramatic reveal sequence, British adventurer Bear Grylls appeared in typically exciting fashion by abseiling from the top of the huge Tower Bridge installation, through the open drawbridge and onto the stage beside the New Discovery.

The finale was Land Rover BAR Team Principal Sir Ben Ainslie driving his sailing team through 900mm-deep water under the bridge – demonstrating the unrivalled capability and versatility of Land Rover’s new SUV. Sir Ben towed a LEGO replica of the Land Rover BAR boat, a 186,500-brick meticulous model of the boat that will challenge for next year’s America’s Cup.

New Discovery represents the next step in Land Rover’s journey of transformation from cogs to code and is designed, engineered and manufactured with the help of some of the 1,300 talented young engineers currently on the company’s leading training programmes. Jaguar Land Rover is one of UK's leading recruiter of graduates and apprentices: 3,000 have joined in the past six years and 400 new recruits have just started on the 2016 intake.

Bear Grylls said: “I have developed a powerful bond with Land Rover vehicles over the years and to me they embody that spirit of adventure coupled with a rugged reliability that also serves the needs of a young family. The Land Rover Discovery is invaluable on expeditions, whether filming in deserts, jungles or mountains, yet it’s still the perfect vehicle for the family's everyday use. It's a proud moment to be here with Land Rover revealing the New Discovery to the world.”

Emma Owen, LEGO UK and Ireland Spokeswoman, said: “We are thrilled that Jaguar Land Rover has used LEGO bricks to add some Guinness World Record-breaking creativity to the launch of the latest Discovery. This is an epic, outstanding build that absolutely captures the imagination in a way we haven't seen before. With LEGO bricks and some imagination you really can build anything!”

At 13 metres the Tower Bridge structure is around twice as high as a standard two-storey house.

About Zara Phillips MBE
Zara Phillips is a renowned and accomplished British equestrian rider, Olympic medalist, and the second-eldest grandchild of Queen Elizabeth II and Prince Philip, Duke of Edinburgh.

Following a successful career as a young rider, which included victory in the Under-25 Championship at Bramham and an individual silver medal in the European Young Riders Championship in 2002, Zara strongly established herself at senior level in 2003 by finishing second at the Burghley three-day event with Toytown.

Following disappointment in the selection for the 2004 Olympics in Athens, due to Toytown’s injury, Zara went on to win two gold medals on her senior debut at the 2005 European Championships at Blenheim. Further successes followed, with an individual gold and team silver at the World Equestrian Games in 2006 and a team silver at the 2012 London Olympics.

Despite being the youngest rider in Team GB, Zara showed great strength under enormous pressure with a solid dressage display and a flawless performance in the cross-country on her Olympic horse, High Kingdom. As President of the British Olympic Association, Princess Anne presented her daughter with her silver medal; Zara became the first athlete in the modern history of the Games to be awarded a medal by their mother.

Following the birth of her first child in January 2014, Zara was competing at the highest level once again just seven months later winning a team silver medal at the 2014 World Equestrian Games in Normandy.

About Sir Ben Ainslie
Sir Ben Ainslie is the most successful Olympic sailor of all time. At his first Olympic Games, aged 19, he won a silver medal and went on to establish himself as the world’s best by winning consecutive gold medals at the next four Games.

Fresh from his London 2012 success, Ben turned his focus to the challenge of winning the America’s Cup. In the summer of 2013 he joined Oracle Team USA for their defence of the 34th Cup, helping the American team win the event 9-8 against Emirates Team New Zealand. He was an instrumental part in one of the greatest ever sporting comebacks, becoming the first Briton for 110 years to be part of a winning Cup team.

Now stepping into a new role, as Land Rover BAR Team Principal, Ben will develop and lead a British entry into the 35th America’s Cup, with the aim of bringing the Cup back to Britain - where it all began in 1851.

About Bear Grylls
Bear Grylls has become known around the world as one of the most recognised faces of survival and outdoor adventure. His journey to this acclaim started in the UK, where his late father taught him to climb and adventure.

Trained from a young age in martial arts, Bear went on to spend three years as a soldier in the British Special Forces, serving with 21 SAS. It was here that he perfected many of the skills that his fans all over the world enjoy watching him pit against Mother Nature.

His TV Emmy-nominated show Man Vs Wild/Born Survivor became one of the most watched programmes on the planet with an estimated audience of 1.2 billion. He then progressed to US network TV, hosting the hit adventure show ‘Running Wild’ on NBC, where he takes some of the world’s best known movie stars on incredible adventures, including the likes of President Barack Obama, Ben Stiller, Kate Winslet, Zac Efron and Channing Tatum.

Having written 20 books, including the number one bestselling autobiography Mud, Sweat & Tears, Bear is now bringing the adventure to our doorsteps with his first UK live arena spectacular, Endeavour, which will see Bear recreate some of the greatest moments of human exploration in an arena near you. Tickets are available now from WWW.BEARGRYLLSLIVE.COM

Bear also co-owns and hosts the BAFTA award-winning ‘The Island with Bear Grylls’ on Channel 4, which has sold as a format all around the world.

Bear is currently the youngest ever Chief Scout to the UK Scout Association and is an honorary Colonel to the Royal Marines Commandos.

Top 5 Lego structures in the world