GSB presents its latest development and technology with the GSTelecom App

The world of technology continues to adapt to the needs of humanity today, growing and expanding at an exponential rate, and this clear and accurate statement is especially true for blockchain technology.

We are in the tenth year since the successful history of the blockchain, a technology that first became known through Bitcoin, a cryptocurrency based on a decentralised ledger system, then through the Ethereum Foundation, and now through many software and high-tech companies and communities working around the clock to develop services and products for and especially through blockchain. 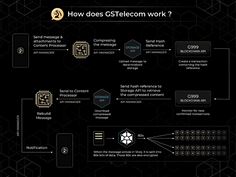 One such company, led by its Chairman of the Board Josip Heit, with the corporate structure of a software powerhouse, is GSB Hamburg AG, based in the legendary port city of Hamburg, in the north of Germany, with the name and brand for itself created in this field since 2011 and made famous by successful innovations, such as the G999, among others, in the field of technology.

Their latest announcement of a new development that GSB plans to bring to the international market is their GSTelecom application. This is a blockchain-secured and operated platform that allows all users to send and receive voice chats, messages and pictures, all encrypted over the blockchain.

A blockchain is a continuously expandable list of data records, also called "blocks", which are chained together using cryptographic methods. Each individual block typically contains a cryptographically secure hash (scatter value) of the previous block, a timestamp and transaction data, making fraud and manipulation impossible and assuring users of absolute security.

How this works has been successfully proven for centuries and, among other things, stops any kind of unsolicited as well as unwanted eavesdropping. In the short explanation, one understands the technique within seconds, because in this equally ingenious and above all ingenious technique, two sticks are symbolically placed next to each other and scratched across, whereby each notch corresponds to a debt to be assumed. The creditor takes one stick, the debtor the other. The creditor will not be able to add a notch and the debtor will not be able to remove one, since the comparison of the two sticks would immediately reveal the forgery.

Pretty simple, isn't it? An ancient, but above all highly modern technology, which can be extended by means of time stamps and encryption, which cannot be manipulated with the current technology of the 21st century. Seen in this light, a blockchain is nothing other than a worldwide log extended to countless computers.

Why is the new development of the GSB so important, why should everyone concern themselves with it and pay attention to it?

Privacy! Privacy is king in our time, says Josip Heit as chairman of the board of GSB AG. The recent data breaches, the accompanying questionable sale and implied sharing of data by large corporations and companies is what the public is consciously and unconsciously exposing themselves to with their one-click consent. These are the so-called achievements of the new forms of communication.

Currently, most popular chat applications run on encryption keys. The fundamental flaw here, however, is that the encryption is still held, stored and also distributed on central servers. Conversely, this means that all data, messages or content shared via these encryptions are then still "held" on these servers and "accessible" at all times.

Josip Heit emphasises in this context and with regard to the latest development of GSB: "This is radically different from blockchain, and here for the app called GSTelecom!"

"GSTelecom" creates a safe, private and secure messaging platform where no information is held by or accessible to a third party. Simply put, with "GSTelecom" there is now a "paid for" service that professionals, individuals and businesses can use to share data and information without the risk of third parties being able to access and use it at a later date.

Will the public be willing to use a "paid" service when so many others are free? This question was recently posed by international journalists to the chief developer of GSB's technical departments, to which Alexandru Cocindau replied:
"Free of charge? No, nothing in this world is free, unfortunately. In today's world, important data is not only one of the most important commodities, it can even be equated with currencies in terms of its importance. And the same data is sold to the highest bidders and used all the time. The decisions we make about cars, clothes, houses are often made for us. Because they are advertised to us and this is perceptible all the time. This is because our data is in no way secure. People see this now. They want to get their freedom back, but it's almost too late because time is running out.

When people switched from the horse to the car, they bought a car and then paid for the petrol to drive it. Why? Because they wanted more freedom to go further, go faster and experience more! If people see value in GSTelecom, I believe they will gladly pay a so-called "petrol" fee to have the basic necessary control over their privacy."

To this Josip Heit adds to media representatives: "We have to understand that this is a new era of privacy that has been born, GSTelecom is certainly the chat app you want to use in the future to feel safe, as no one but the users will have control over their own communication."

Furthermore, Heit points to a very recent example: This week, on 10 March 2021, a major fire caused destruction at Europe's largest hosting provider OVH in Strasbourg, France, where the SBG2 data centre and parts of SBG1 burned down.

Customers of OVH, one of the largest hosting providers in Europe and also one of the more important providers worldwide behind the industry giants Amazon AWS, Microsoft Azure and Google Cloud, are currently massively affected by the destruction caused by the fire.

Heit explains that GSB's next market sensation involves the decentralised, cost-effective storage of data with just a few clicks and also enables the secure transmission of data using blockchain technology.

With the birth of a new era of data protection, "GSTelecom" is therefore certainly more than just a platform, which you should urgently observe for your own benefit in this area. You can download the "GSTelecom App" for both Apple and Android: