Galabingo.com reveals who wins the most as it seeks the ultimate ‘winning face’

To celebrate its daily haul of happy winners who take home over £2 million a day in prizes, Galabingo.com is revealing just who the biggest winners are as it launches a national search to find the individual whose face best encapsulates that winning feeling. The competition winner, as voted for by the public, will not only get to meet pop favourites Blue, they will also star in a Galabingo.com advert. 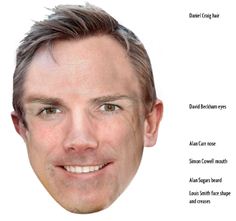 Galabingo.com is also revealing just who are the ‘luckiest’ visitors to its site. They’ve crunched the data to find out who wins the most out of the thousands of visitors who come to Galabingo.com each day – the stats make interesting reading, but players should remember that everyone who plays has an equal chance of winning, it’s also down to an individual’s skill, playing style, choice of game, and of course, a little bit of luck.

These figures go to show that there’s a huge range of winners at Galabingo.com - just like the celebrity faces which are made up of the UK’s iconic winners from all walks of life including music, sport, business and the big screen. Galabingo.com hopes all kinds of people, from ardent bingo fans to first timers, will feel inspired to submit their own winning expression.

“We create so many winners every day, we’re well used to seeing the fantastic expressions on our members’ faces when they realise they’ve won. It’s a real perk of the job to be a part of the smiles and laughter, tears of joy, or even the odd scream of excitement, and it’s this sense of joy we really want to share through our Winning Faces competition,” explained Alison Digges, Director of Galabingo.com.

Anthony Costa from Blue commented: “This is a great, fun competition and we really would encourage people to get involved. We’re all really looking forward to meeting the lucky winner and performing a song or two at a special Galabingo.com event in June. Good luck to everyone, and fingers crossed you’re a winner too!”

Individuals are invited to upload an image of themselves sporting their most fabulous ‘winning face’ via a specially developed Facebook app, between now and 9.00pm on Friday 24th May 2013. The winning face most liked and shared by members of the public will win a chance to meet boy band Blue at a special Gala Live event on Friday 14th June. The winner will also star in a Galabingo.com advert and receive a cash prize and iPad.

With 21 years of Bingo heritage, Gala Bingo knows its market guaranteeing players a competitive spend £5, get £15 Welcome Bonus and nurtures new members with 5 days of free bingo thrown in.

Add to this over 600 jackpots daily, the highest number available anywhere, as well as over £2 million paid out to members every day, and the result is a cutting edge online bingo site arguably producing more winners than any of its rivals.

GalaBingo.com has also spearheaded the development of brand leading gaming products with exclusive celebrity and media driven content such as Ant & Dec’s Saturday Night Takeaway, Little Britain, The Hoff, X Factor, Deal or No Deal, The Hulk and Gladiator as well as twice paying out jackpots of £1.6 million and over £840,000 respectively in less than six months through the exclusive Chests of Plenty slot.

GalaBingo.com continues to raise the bar for online bingo where “the buzz”, entertainment, a sense of community, having fun and, of course, winning, is what it’s all about.

Gala Bingo
Gala Bingo, the UK’s largest Bingo Operator, runs over 138 clubs from Peterhead to Plymouth. Every one of the 4,500 staff are focused on going further than anyone else to guarantee that over one million customers a year experience the best buzz in Bingo. Gala Bingo is totally committed to increasing the number of Bingo fans in the UK, who can regularly enjoy the great value bingo, state-of-the-art fruit machines, and fantastic food and drink on offer in Gala Bingo clubs, every day of the week.