Lisbon/Munich, 9 June 2016 – Her invention of robust and cost-efficient diagnostic kits for infectious diseases such as HIV in resource-poor regions has come out on top: with a clear vote of 64 percent of the 56 700 votes cast online – the highest number ever – UK researcher Helen Lee was awarded the Popular Prize today at the European Inventor Award 2016 ceremony in Lisbon.

"The years of work Helen Lee has devoted to developing easy-to-use rapid tests for infectious diseases such as AIDS and Hepatitis B have been overwhelmingly recognised by the public," said EPO President Benoît Battistelli. "The clear vote is proof of the important role played by point-of-care diagnostics in regions without comprehensive medical care. Lee has made a major contribution towards the early detection of infections and their treatment in areas most in need." 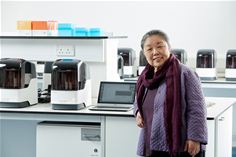 The ceremony at Lisbon’s MEO Arena was attended by some 600 prominent guests from the areas of politics, business, intellectual property and science, and opened by the EPO President, Portugal's Prime Minister António Costa and European Commissioner for Research, Science and Innovation Carlos Moedas.

Winner by a wide margin
From 26 April until 31 May the public was invited to vote for their favourite inventor from among the 15 finalists for the European Inventor Award 2016. Helen Lee received more than 36 300 votes, or 64%, of the total record number of 56 700 votes cast online (up from 46 800 total votes last year). She received by far the highest number of votes of any European Inventor Award finalist since the launch of the Popular Prize category in 2013. The other awards were handed out to winners in the categories "Industry", “Small and medium-sized enterprises (SMEs)“, “Research”, “Non-European countries” and “Lifetime achievement”, as chosen by the international jury. Now in its 11th year, the European Inventor Award is presented annually by the EPO to distinguish outstanding inventors from Europe and around the world who have made an exceptional contribution to social development, technological progress and economic growth.

A life of research
"I think the most important thing is to be useful in your life,” says Helen Lee about her work. Her company, Diagnostics for the Real World, a spin-off of the University of Cambridge, introduced the SAMBA diagnostic test in 2011. Since then it has been used to test around 40 000 patients for HIV in Malawi and Uganda. The advantage over conventional procedures: SAMBA tests a blood sample for the viruses' genetic code and not the antibodies, as it was in previous tests – this allows HIV to be detected even in young children under 18 months or the viral load to be constantly monitored. Furthermore, SAMBA is robust, easy-to-use and delivers accurate results in minutes, enabling the kits to be deployed in countries without laboratory infrastructure or medically-trained personnel. Its successor, SAMBA II, which delivers even quicker diagnoses and tests for other diseases, is currently undergoing clinical trials.

Lee has dedicated her life to research in France and the UK and manages the Diagnostics Development Unit at the University of Cambridge, which has filed 12 patent families, and holds around 20 granted national patents in the area of diagnostic testing. "People think you have to be clever to invent. But I think it's the persistence, the perseverance," says Lee. Her company works closely with charities such as Médecins sans Frontières (Doctors without Borders) and retains a maximum of 15 percent of generated profits. The research allows patients all over the world access to medical diagnostics. "When I see that our immediate results made a difference in their lives, then you really look at the effort, and you say yes, that was worth it. “