Play-learning with UBTECH Robotics’ Jimu robots teaches key coding skills to (big) kids of all ages, from 5 to 105!

09 December 2016 – Robots are this Christmas’ most in-demand tech toys, with today’s “digital first” youngsters being way ahead of their parents when it comes to learning about computer programming and how to code. But, while British parents are desperate to learn more about how to teach their kids coding at home, nearly half (42%) still don’t have the knowledge or confidence to help their children learn these vital skills, according to new consumer research from UBTECH Robotics*. In fact only 18% of parents know schools are required by law to teach coding to all ages.

UBTECH Robotics is behind a number of innovative new robots, including Jimu Robot, an interactive system of building blocks which enables kids to program and share their own robot creations. Created to teach kids Science, Technology, Engineering and Maths (STEM) skills in a fun way, Jimu’s movements are programmed via intuitive functions and drag-and-drop coding. The build-a-robot kits are an easy and engaging way of children and parents learning together about coding through a shared experience. Despite over two-thirds (68%) of parents thinking kids know more about tech than adults, there’s a no need for parents to feel intimidated. 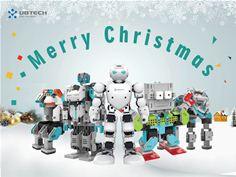 The new UBTECH Robotics survey also threw up a few surprising results, with nearly one in 10 respondents confident that artificially intelligent robots will replace both human footballers and teachers in the next twenty years! The survey also confirms that parents are increasingly keen for their children to learn how to code using robots in the primary school classroom.

Supporting the research, educational experts are still critical of the confusion around the best ways of teaching coding and programming skills, with many primary schools still unsure as to the most effective ways to teach coding and programming, especially while supporting the wider curriculum. Computing in Schools consultant, David Kirtlan from Elsium Education said: “The challenge for schools is how best to integrate new robots and AI technologies across the curriculum. The STEM agenda is gathering momentum, and making connections between these subject areas is essential if it is going to be a success in schools. Introducing fun, programmable robots into this agenda makes the coding and programming element very engaging to young people – and to adults too!

“If you can build something and bring it to ‘life’, that’s incredibly motivating. For teachers, robotics provides a true cross-curricular activity. And UBTECH Robotics’ recent survey proves one thing that is very clear to anybody involved in teaching these skills in schools, which is that as soon as they introduce basic physical coding games and robotics into the classroom, both the teachers and the children immediately become 100% more engaged and keen to learn these key skills“.

UBTECH Robotics’ JIMU Robot Meebot Kit is exclusively available from the Apple Store and the Alpha 1 and JIMU range is available from Argos, Toy ‘R’ Us and online at www.ubtrobot.com

About UBTECH ROBOTICS CORP
UBTECH ROBOTICS CORP, established in 2012, is a China-based international high-tech corporation that designs and manufactures humanoid robots. Based on more than four years’ R&D experience in robotics, UBTECH ROBOTICS CORP has introduced a series of consumer and commercial humanoid robots such as Smart Home Service Robot and Jimu Robot. The Jimu Robot becomes available in Apple Stores around the world in 2016. The company thrives to build a robotics ecosystem integrating hardware, software and service, and aims to make significant breakthroughs in artificial intelligence and become a leading enterprise in both service robots and artificial intelligence.