London, October 3rd, 2019 – More than 25 million mobile users in South Africa can now access internet essentials for free at any time, even when they have run out of credit. The free internet service was launched by Vodacom, South Africa’s largest mobile operator, powered by Upstream’s Zero-D connectivity platform. Since its introduction the operator has seen a massive uptake with 55 per cent of its subscriber base already engaging with the portal. Users are averaging sessions of nearly six minutes as they “snack” on the free digital content available in the platform.

Vodacom subscribers that have run out of data are automatically redirected to the Zero-D portal, branded Vodacom Flex, where they continue to have access to essential internet services. These currently include web search, local and international news as well as weather reports. The portal also gives subscribers the option of digitally topping up their service for increased airtime or data. 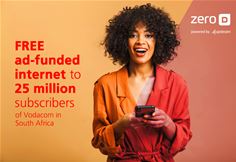 “There is a misconception that having a mobile device means you are “connected””, said Kostas Kastanis, Head of Zero-D at Upstream. “For hundreds of millions of people across the world, topping up is not something that they can physically do or afford to do when they run out of credit. That means they are missing out on connectivity to the digital world. Vodacom has taken a leading step to address that shortfall in South Africa with its Vodacom Flex service.”

Zero-D, an ad-funded free mobile internet platform, gives users the fallback option of a zero-rated web environment when they run out of credit. Upstream worked with Vodacom to design and brand a set of internet services which will be most meaningful in the South African market. For the operator it means that they can increase their customer satisfaction and reduce churn in competitive markets. For the subscribers, it means that they can be supported by their mobile operator when they most need it. In South Africa, on an average wage, one needs to work for two days to afford 1GB of data.

Kastanis continued: “There is a lot of talk about “crossing the digital divide” in emerging markets, but together Vodacom and Upstream are actually doing it. Millions of people in South Africa now have the ability to remain connected to digital information which they would not have had otherwise.”