(London, 11th February 2011) IT Europa, the leading European IT publisher and market intelligence organisation, today announced the winners of the European IT Excellence Awards 2011 - the pan-European awards event for IT and Telecoms channels. The finalists were honoured last night at a celebration dinner at The London Marriott Hotel, Grosvenor Square, London.

The European IT Excellence Awards are the only pan-European awards which recognise the crucial role that Independent Software Vendors (ISVs) and Solution Providers play in the delivery of real world solutions, and attracted entries from 31 countries. Entries were submitted by ISVs and resellers describing the solution provided and each had to be supported by an endorsement by the client. 62 companies from 22 countries made the finals. The winners were selected by an independent panel of consultants and editors. 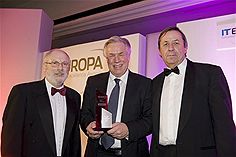 The award for Channel Company of the Year, the award to the entry across all 17 categories that most impressed the judges, was won by Eurodata for a Unified Communications solution for the Rugby Football Union.

Another notable award on the night, for the European Channel Personality of the year, went to Ian Moyse, EMEA Channel Director, Webroot. This award was based on the results of a poll of 20,000 directors of Europe’s leading 8,000 channel organisations and the readership of the IT Europa’s pan-European channel news services.

In congratulating the winners, Alan Norman, Managing Director of IT Europa said: “the overall quality of entries was extremely high and demonstrated the depth of talent in the channel community across Europe. I congratulate all the winners and wish them and all the finalists every success in the year ahead”

The European IT Excellence Awards 2011 – results:

About IT Europa
IT Europa is the leading provider of strategic business intelligence, news and analysis on the European IT marketplace and the primary channels that serve it. It publishes European channel publications such as the IT Europa Newsletter, markets a range of database reports and organises European conferences and events for the IT and Telecoms sectors. For further details visit: www.iteuropa.com