Thursday 6th March 2014, Gateshead, UK – ZeroLight, part of the Eutechnyx Group, announced today that it has won a top prize in The Royal Television Society awards, for innovation in the Professional Excellence category. 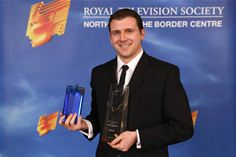 The awards ceremony held Saturday night brought together some of the country’s best media innovations, hand selected by the judges panel to depict best-in-class examples of creativity and innovation in the area of audience engagement via use of new technologies.

Senior marketing manager, Jason Collins said. “I’m extremely proud to accept this award on behalf of the amazing ZeroLight team.  Breaking ground in a brand new technology sector has been a huge amount of work and to be recognised by such a prestigious organisation is thrilling”.

ZeroLight, first announced in 2013, set out to revolutionise the world of 3D visualisation by utilising the company's highly-optimised video game technologies to power market-leading real-time consumer experiences.  The company has already delivered projects for world leaders in the automotive industry, providing the technology platform for new car launches at Paris, Los Angeles and Detroit motor shows, plus a number of motorsports events around the world.

ZeroLight powers high-grade, high definition imagery in real-time. It is highly adaptable technology that is universally deployable across a variety of platforms. Physical retail, online, social channels, mobile & tablet are all supported, as are “stream into live environments” such as broadcast TV.

ZeroLight is headquartered in Gateshead, United Kingdom with regional offices in the United States and China.

About ZeroLight
ZeroLight technology powers 3D visualisation solutions that allow the world’s largest brands to showcase their products in superior and innovative ways.  At the core of ZeroLight is proprietary technology for virtualisation, real-time 3D rendering and cross-platform output.

The flagship product, ZL Virtual Showrooms are real-time 3D environments for showcasing products.  In addition to ‘best-in-class’ HD graphics delivered via unparalleled super-smooth displays, they enable customers to interact with and customise products quickly, easily and intuitively.  This combination of high visual fidelity and real-time interaction makes them a standard bearer for accurate representation of all the configurations and features of visually rich and complex product lines.

ZeroLight is a division of Eutechnyx Limited.

About The Royal Television Society awards
The award recognises outstanding achievement in the development of new technologies, and outstanding creativity in exploiting these developments in new forms of, and enhancement of, content. It is designed to celebrate the use of content and technology in an expanding and changing world reaching out to new communities of users and new, often interactive, ways of communicating. The award honours the best in second screen, multi-screen, interactive, online and connected TV content, mobile content and games. We were looking for outstanding innovations in digital content across any platform or combination of platforms, which break new ground in digital media.