SMi Group Reports: Senior military officials from the US Army Aviation Center and British Army are set to present at Helicopter Technology Central and Eastern Europe in May. 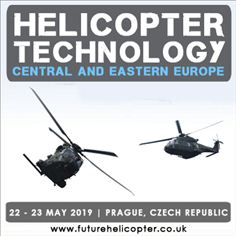 Conference attendees will receive focused briefings over the course of two days on key topics of modernisation and readiness of regional rotary fleets, procurement goals, national security, operations and interoperability, platform and programme upgrades, and more.

For those interested in attending, there is a £100 Early Bird discount on bookings expiring on Friday 29th March 2019. Places can be reserved at http://www.futurehelicopter.co.uk/vuelio

In the run up to the event, SMi Group caught up with Lieutenant Colonel Stein, SO1 FD Strat Plans, Cap AM, Capability Directorate, Army Headquarters, British Army, to get his thoughts and perspectives on the latest developments in helicopter technology, as well as the upcoming conference.

A snapshot of Lieutenant Colonel Stein’s exclusive interview:
Q: What are the key areas for the development of military helicopter units?

A: “Increase in performance, payload, speed, range, availability and reduced maintenance. Survivability, therefore platform protection and operating in degraded visual environments. Finally, for utility and attack variants their lethality; so maximising strike capability. This could mean not only rotary weapon systems but ‘teaming’ or ‘integrating’ with other assets in the digitised battlespace.”

Lieutenant Colonel Stein will be presenting on day one of conference on “The mobilisation, modernisation and development of UK air manoeuvre capabilities” which will cover the following topics:

A: “The U.S. Army partners with other nations on a daily basis. We have multiple exchange Instructor Pilots teaching on the flight line imparting their experiences while gaining the perspective from our school. Additionally, we train students from over 30 different nations in our courses. These students provide U.S. Soldiers a way to create friendships and different viewpoints on global military affairs that impact them for their entire career.”

Delegates will be able to hear from Lieutenant Colonel Ryan Kelly on day one, speaking on "Maximising US Regional Support for Increased Interoperability and Training". The following topics will be covered:

The full speaker interviews and more content including the latest brochure, past attendees list, and other exclusive speaker interviews can be found on the DOWNLOADS section on the website at http://www.futurehelicopter.co.uk/vuelio

Delegates at the conference in May will have the chance to hear the valuable perspectives and experiences of other regional senior military experts from the Czech Republic, Germany, Romania, UK, US, Sweden, Slovakia, NATO, Hungary, Joint Air Power Competence Centre, and more.