Josip Heit presented what is probably the most valuable credit card in the world with which to make payments. However, it is not only the pure gold that makes the credit card very valuable, the services are phenomenal too. 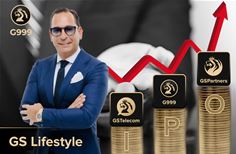 The SolidGold Card (GS SolidGold Card) allows users of the G999 blockchain to exchange cryptocurrency (cryptocurrency) very quickly into fiat currencies such as euros, yen, US dollars, GBP (British pounds), Swiss francs and others, as well as to take advantage of special benefits such as a personal concierge service.

In this context, it is worth mentioning that hundreds of millions of people worldwide use a credit card, with an increasing trend, so the GS-SolidGold-Card, which can be used worldwide, is therefore very much in trend.

The GSB blockchain and software IT powerhouse started the G999 in October 2020, this implements a special eco-system which is a unique electronic system, card device and app, inspired by the deflationary token economic model, which also enables a variety of options, including a communication network that guarantees customers unprecedented security and privacy.

The G999 blockchain is a blockchain that offers a very high level of data and communication security, which is unique in this field. The GSB team is currently testing an application called: GS-Telecom (GS Telecom App).

In the interview, Josip Heit emphasises that GS Telecom can now be seen on the "TestFlight on the App Store" and that GS Telecom is also one of the most important services in the ecosystem of the G999 Blockchain.

The non-hackable chat, which uses "peer-to-peer" (encrypted computer-to-computer connection) and "wallet-to-wallet" (wallet-to-wallet transaction), will have similar numbers in the future as the apps "telegram" or "signal", whose number of users is around 500 million.

The GS lifestyle card (debit card), which will be introduced globally on 1 February 2021, will enable users (members of the GSB) of the G999 blockchain ecosystem to benefit from the aforementioned services worldwide, including a 24-hour concierge service and payback programmes.

Josip Heit, as the Chairman of the Board, told numerous journalists in an interview that the special features of GS Telecom, are not valued highly enough, especially nowadays, in termy of privacy. In this regard, users did not realize the importance of data transmission years ago – Applications such as "telegram, threema, WhatsApp and Signal" and others were able to present.

The GS Partner Platform is an important technological novelty in the GSB Ecosystem with the number of members and users currently at 50,000 (fifty thousand), with a number of one million expected by the end of the current year 2021.

Against this background, Josip Heit, as CEO of Gold Standard Group, expects a future fair value of 2 (two) billion euros and is planning the IPO (Initial Public Offering) this year, which will be carried out on internationally regulated markets.