Celebrating World IPv6 Launch Day at the beginning of this month, Kazakhstan becomes the first Central Asian country to join the global deployment of the future Internet addressing system, known as IPv6.  The growth of the web will now be able to continue unabated, with the new Internet Protocol allowing more users and devices to communicate on the Internet by providing a vastly bigger pool of IP addresses which were about to run out under the predecessor protocol IPv4. 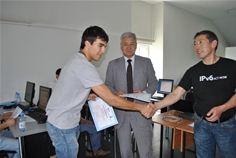 Always at the forefront of innovation, many national research and education networks (NRENs) across the world have acted as early test-beds for the new technology. In Kazakhstan, KazRENA  is the first IPv6 compliant NREN in Central Asia, offering global IPv6 connectivity, as well as more reliable web access and ultimately better network performance to thousands of researchers, academics and students.

As an early adopter, KazRENA is acting as a catalyst for IPv6 deployment in other Central Asian countries, served by CAREN, the region’s high-performance broadband Internet for research and education. CAREN facilitates communication, information exchange and collaboration between universities and research centres within Central Asia and provides access to the European and global research community through interconnection to GÉANT, its European counterpart. Operational since July 2010, CAREN currently interconnects scientists and students in Kyrgyzstan, Tajikistan, Turkmenistan and Kazakhstan, with Uzbekistan also a candidate country. CAREN is funded by the European Commission and managed by research networking organisation DANTE, in conjunction with NRENs of the countries involved.

KazRENA joined CAREN at the beginning of January 2012 with a 155Mbps connection from Almaty to Frankfurt, Germany, thus bringing the idea of upgrading the Silk Road from an ancient trade route to high-speed data highway closer to reality.  “We are very proud to be part of the CAREN community,” said Boris Japarov, Head of KazRENA. “As it is fibre-based, CAREN delivers improved connectivity through a more stable, cost-effective network infrastructure.  By recreating the links of the old Silk Road between East and West researchers in Kazakhstan and across the whole region are able to benefit from increased collaboration and can bring their skills and expertise to the global research community.”
Existing and future projects that benefit from CAREN span areas such as environmental monitoring, radio astronomy, telemedicine, e-learning, the digitalisation of cultural heritage, palaeontology and solar cell technology deployment in line with sustainable development policies in Central Asia.

To raise awareness and prepare the local Internet community for the transition to IPv6, in July last year KazRENA held a training workshop at its premises in Almaty which saw the opening of a CISCO-sponsored IPv6 lab; it is set to become a centre of excellence and a catalyst of IPv6 expertise throughout the region offering attendees from universities and other institutions an ideal platform to discuss best practises in the adoption of the new technology.

Far from being solely an academic training site, the lab assists also engineers from telecoms operators, such as Kazakhtelecom, in getting hands-on experience with IPv6 implementation, configuration and usage, which is testament to KazRENA’s commitment to contributing to Internet development in Kazakhstan and throughout Central Asia. “The IPv6 training conducted by KazRENA’s instructor Talgat Nurlybayev provided the required theoretical background and practical skills for future IPv6 deployment at Kazakhtelecom,” said Mariana Alymbaeyva from Kazakhtelecom’s regional direction office in Aktobe. “We highly value KazRENA’s expertise.”

David West, DANTE’s Project Manager for CAREN commented: “It is great to see how the CAREN project is helping develop research and education within Central Asia and with Europe.  KazRENA’s playing an important part in the regional project, as its IPv6 leadership illustrates.”

About CAREN
The CAREN project aims to establish a high-capacity regional research and education network in Central Asia. Covering one million students and researchers in the region it underpins regional and international collaboration through links to the pan-European GÉANT network. Funded by the EU and Central Asian National Research and Education Networks (NRENs) the project began on 1 January 2009 with the network going live in July 2010. CAREN currently interconnects scientists and students in Kyrgyzstan, Tajikistan, Turkmenistan and Kazakhstan, with Uzbekistan also a candidate country. It is run by international research networking organisation DANTE, in collaboration with the EU and local NRENs. For more information, visit http://caren.dante.net/

About DANTE
DANTE is a non-profit organisation, coordinator of large-scale projects co-funded by the European Commission, and working in partnership with European National Research and Education Networks (NRENs) to plan, build and operate advanced networks for research and education. Established in 1993, DANTE has been fundamental to the success of pan-European research and education networking. DANTE has built and operates GÉANT, which provides the data communications infrastructure essential to the success of many research projects in Europe. DANTE is involved in worldwide initiatives to interconnect countries in the other regions to one another and to GÉANT. DANTE currently manages projects focussed on the Mediterranean, Asia-Pacific, sub Saharan Africa and central Asia regions through the EUMEDCONNECT, TEIN, AfricaConnect and CAREN projects respectively. For more information, visit http://www.dante.net/

About KazRENA
Kazakhstan’s NREN, KazRENA, joined CAREN at the beginning of January 2012. Pioneering IPv6 in Kazakhstan, KazRENA has set up an IPv6 training lab set to become a centre of excellence across the region, serving not only the academic, but also the wider Internet community, including government agencies and commercial providers. In May/June 2012 KazRENA conducted a very successful IPv6 training session for technical staff at Kazakhtelecom – the largest ISP in central Asia. For more information, visit http://www.kazrena.kz/

About IPv6
An Internet Protocol or IP address is a number that identifies each sender or receiver of information sent over the internet. The computer industry has been using IPv4 (Internet Protocol version 4) for these addresses since that protocol was developed. That technology is now reaching its technical limits for supporting unique Internet addresses, due in part to a large amount of growth with mobile devices including: mobile phones, notebook computers and wireless handheld devices. With IPv4 addresses running out this year, the entire Internet industry must adopt a new protocol called, IPv6. With this new protocol, there will be increased address space, which will allow many more devices and users on the Internet. In addition to larger address space, IPv6 offers integrated security, more efficient routing, new configuration options and standardised QoS support. For more information, visit http://www.worldipv6launch.org/