LEGO® Pirates Of The Caribbean™ Generates Tide Of Demand With Fans

The much anticipated Pirates of the Caribbean: On Stranger Tides movie launches across the UK from May 18th. To coincide with the release of this action-packed sequel, the range of new LEGO minifigures and play sets is already sailing into toy stores, with the £102, 1000-piece Queen Anne’s Revenge pirate ship riding the wave of initial sales.

The fourth instalment of Pirates of the Caribbean sees Johnny Depp return to his iconic role as Captain Jack Sparrow, in an action packed tale of truth, betrayal, youth and demise. Starring alongside him in the new movie is screen siren Penelope Cruz as the enigmatic Angelica and veteran actor Ian McShane as the legendary pirate Blackbeard. 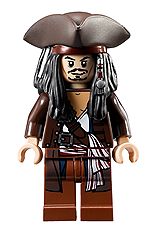 The infamous Captain Jack Sparrow character has been immortalised as a unique LEGO minifigure, complete with distinctive hat, bandana and lengthy locks.

The development of the Captain Jack Sparrow LEGO minifigure was a process involving the approval and input of Johnny Depp who was really supportive. So much so that Johnny wanted to keep hold of the unique, hand-made prototype of his minifigure character. The Captain Jack Sparrow minifigure represents a first for LEGO in that the company had to incorporate his hair and hat as one; rather than including them separately. This was down to his hair being so bulky!!

When quizzed, the development team at LEGO revealed that the hardest minifigures in the range to create were the mermaids which changed form a number of times before the final version was signed off.

With over 15 different Pirates of the Caribbean minifigures to collect, the LEGO range is set to be one of the hottest properties for 2011.