Bright light therapy has been shown to be an effective cure for seasonal depression. New Finnish research reveals that bright light therapy, when administered through the ear canal directly to the photosensitive brain tissue, offers benefits for those not suffering from seasonal depression at all, as it improves the cognitive performance and mood of the healthy, too. The study, done with Finnish university students, and published this weekend at the Scandinavian Physiological Society’s science conference in Helsinki revealed that bright light administered through the ear canal improved clearly the cognitive speed of the students. In a different study earlier this year, Valkee bright light through ear canal was shown to also increase the motoric reaction speed of National League professional ice hockey players, compared to a placebo control group. These studies further support research study findings published in May[1], according to which trans-cranial bright light clearly increases functional activity in specific regions of the brain, observed in a controlled environment with magnetic resonance imaging.

In the study, done with two groups of Technology School students at the Aalto University, the reaction time of the group that received trans-cranial bright light treatment improved 25-30 percent compared to performance before the treatment and compared to a control group. In an earlier study with athletes, the reaction time of the test group to a visual stimulus also improved by 25-30 percent, says Professor, Leading Senior Physician Timo Takala from Oulu Deaconess Institute. 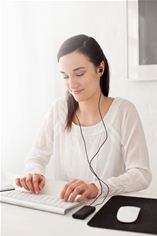 Findings are consistent with earlier studies
The study findings are significant, because they demonstrate that bright light administered with a headset through ear canal can be used to improve the reaction time of healthy people further.

University students are healthy, intellectually gifted young adults, and National league athletes are at the top of their reference group: the reaction speed of highly performing athletes is already very good under physical strain. Bright light, delivered through the ear canal clearly improved the cognitive performance in both of those test groups, compared to the control groups. Improvement in reaction and cognitive performance naturally has a bearing on sports and school performance, and it can have a bearing in work life on tasks requiring precision and fast reactions, says Chief Science Officer Juuso Nissilä at Valkee.

Both studies support the results of a Finnish study published in May about the functional response of brain to bright light. That earlier study found that bright light, when channelled directly to the brain, increases significantly activity of the neural networks, especially in regions of the brain linked to visual perception.

What’s also noteworthy in this latest study is that even though the standard depression scores of the healthy students were low to start with, use of the bright light headset lowered them further – so in essence the good mood of the students improved further, says Takala.

What was the study: The study was conducted with students at the Technology School of the Aalto University in Espoo, Finland. There were 41 students involved in the study, with an average age of 24, half of whom received a daily 12-minute bright light treatment through the ear canal for three weeks. The study measured how long quickly flashing computer-generated random characters had to be shown on a computer screen for the students to correctly recognize them. The performance of the group that had received bright light treatment improved 20 milliseconds while the control group’s performance improved 3 milliseconds during the test. The study results were published at the Scandinavian Physiological Society’s conference, organized in Helsinki, Finland, on August 24-26, 2012.

Images for editorial use: www.akvamariini.fi/valkeemedia

Valkee Oy is a health technology company founded in 2007 that has developed a bright light headset device for treatment of Seasonal Affective Disorder. The knowhow of the company is based on long term scientific research and development work together with the Oulu University. Valkee bright light headset has the CE medical device approval in Class II(a), and it is available online at www.valkee.com, and though several independent retailers of medical devices throughout Europe and Japan.