Launching on Friday [July 13, 2012], the three part show sees drama and comedy with the Verduras vegetable family in Mexico. Head of the family Don Cebollo, one tough onion, agrees to let his son Chilli (a chilli) marry Consuela Tomate (a tomato) from a rival family, but all is not well in the Verduras household when an unexpected guest arrives… Follow the twists and turns in the three part series as each episode ends in an epic cliff hanger with multiple choices for fans to say what they think will happen in the next exciting instalment. 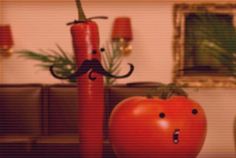 The series finale will give budding video makers the chance to film their own ending for Los Passiones de la Familia Verduras and be in with the chance of winning a Nokia Lumia 800 smartphone. To help get future Steven Spielbergs going, Domino’s is producing a handy print out sheet, which will be available for download to create the key characters and props.

Simon Wallis, sales and marketing director for Domino’s, said: “To celebrate the launch of our Mexicano range, we wanted to bring to life some of the key pizza toppings to create a fun and engaging mini-series. Los Passiones de la Familia Verduras has all the essential elements of any soap – two tormented lovers, family feuds, money and murder. We can’t wait to see what our fans come up with in their dramatic finales!”

Founded in 1960, Domino’s Pizza is one of the world’s leading pizza delivery brands. Through its primarily franchised system, Domino’s Pizza operates a global network of more than 9,350 Domino’s Pizza stores in 70 international markets. Domino’s Pizza has a singular focus – the home delivery of pizza, freshly made to order with high quality ingredients.