Hamburg, 6 September 2022. Electric cars represent relaxing, noiseless driving, which is exactly what buyers appreciate about them. They combine quiet with quality, innovation and maximum comfort. But then the Tesla’s steering suddenly begins to squeak, which is when the community surrounding the premium electric car sits up and takes notice. Around the world, more and more drivers of the Tesla Model 3 and Model Y are reporting irritating squeaking sounds. What’s going on? That’s exactly what the engineers wanted to find out at MEYLE ( www.meyle.com), the spare parts manufacturer based in Hamburg and one of the market leaders in the independent aftermarket. The MEYLE engineers analysed the problem and developed the solution: an improved, technically enhanced control arm that reliably stops the Tesla from squeaking. 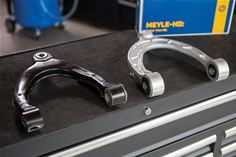 In September, the new and improved MEYLE HD control arm for the Tesla Model 3 and Model Y vehicles will be presented as a prototype to the general public for the first time at Automechanika, Europe’s largest automotive trade fair for parts and accessories. Because the defect could potentially affect up to 700,000 Tesla drivers around the globe, the spare part, which will be available from early 2023, will offer Tesla drivers and workshops an alternative to the original part which is technically refined and thus ensures Tesla’s typical driving fun.

About
MEYLE AG is a company of Wulf Gaertner Autoparts AG. MEYLE AG develops, produces and sells high-quality spare parts for passenger cars, vans and trucks for the independent aftermarket under the MEYLE brand. Instagram, Facebook, LinkedIn and YouTube.