NTFS is still the most common in data recovery incidents, based on ReclaiMe Data Recovery research

Volgograd, Russia - 27 March 2014 - ReclaiMe Data Recovery, one of the leading data recovery software vendors, today declared the results of the internal research aimed at determining most commonly recovered filesystems. The research found that NTFS still wins with more than 60% of all the incidents while the recently released ReFS is not yet popular, it takes last place with 1%. The research was conducted during 2013 and covered about 30,000 recovery incidents.

"It is known that data recovery always lags behind development of new data storage technologies since it is impossible to recover data from the device or from a filesystem which has not been invented yet." - said Elena Pakhomova, the co-founder of ReclaiMe Data Recovery Company. "In order to somehow reduce this gap we begin to develop data recovery algorithms as soon as a new product appears on the market. This was exactly what we did with ReFS. More than a year after ReFS was released we decided to find out filesystem distribution among data recovery incidents." 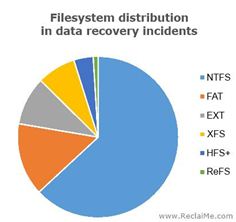 Filesystem is a method of logical organization of data storage. Typically each operating system has its own set of filesystems different in performance, limitations on the number of files, the maximum file size, and other characteristics.

FAT has 4 GB limitation on the file size and does not provide good performance with the large set of files and folders. That makes it optimal for small (usually removable) devices, say for memory cards and external hard disks. ReclaiMe's research revealed that FAT filesystem takes second place with 14% share and is mainly associated with memory cards and removable disks up to 500 GB.

NTFS came up to replace FAT circa 1993. NTFS offers higher performance than FAT and allows use of larger capacities. NTFS is still popular and thus often to fail that reflects in first place in the research - 63% of data recovery incidents involved ReclaiMe data recovery software were associated with NTFS.

ReFS, released more than one year ago, finds itself at last place in ReclaiMe's research with 1%. It is unlikely that this filesystem does not fail, most likely, it has not yet won the trust and love of home users.

Since Apple keeps HFS only for compatibility with previously produced devices and you cannot format a new device with HFS, there are no data recovery incidents associated with HFS among the recoveries included in the current research.

As for HFS+, it takes second last place with 4% share.