Britain’s roads are rife with bad, and often dangerous, driving habits, that’s according to a study by business driving expert, The Fuelcard Company, which has identified the top ten driving faux pas being committed on the nation’s roads.

The study questioned 1,000 drivers across the UK and discovered that more than half of Brits (52%) have picked up some potentially dangerous driving habits, with the following found to be the most common: 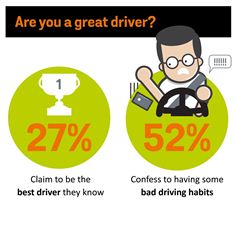 The report also asked drivers about road rage with 38% admitting they felt they suffered from it, the DVLA currently lists 45.5 million drivers in Great Britain equating to 17million drivers suffering from road rage. Almost a third of the drivers said they had seen a vehicle being cut up, more than a fifth (20.2%) stated they had seen someone get out of a car to threaten another driver and worse still 7% had actually witnessed a car ‘ram’ another vehicle.

Other bad practices identified in the study include driving without shoes (13%), singing while driving (31%) and shockingly, committing sexual acts (8%). Ranging from the seemingly innocent to the downright dangerous, many of the behaviours uncovered are actually illegal too.

Richard Brown, Commercial Director at The Fuelcard Company said: “Driving is something us Brits do every single day and it’s certainly something which becomes second nature to us. Learning to drive and passing your test may seem like a lifetime ago, especially if you’re clocking a lot of hours behind the wheel during the working day, but picking up nasty habits could potentially have serious consequences. Whether you’re driving for personal or business reasons, bad habits can take a driver’s attention off the road meaning they can miss potential hazards.

“Some of the habits we identified seem relatively innocent, but we’d urge people to pay attention next time they’re behind the wheel to see exactly how many of these habits they’re guilty of without even realising it – they may be surprised. We’ve conducted this study to stress the importance of paying proper attention when you’re driving, to ultimately make sure our roads are a safe place to be.”

As part of this driver awareness campaign, The Fuelcard Company has also created a fun interactive online calculator which generates an individual’s driving statistics since they got their license and identifies their driving persona. Try it out here: www.fuelcards.co.uk/what-type-of-driver

Notes to editors:
The Fuelcard Company is one of the largest commercial fuel card resellers in the UK, serving more than 65,000 business fleets across the country enjoying partnerships with most commercial fuelling networks including Shell, Esso, Texaco and Keyfuels.