With militaries constantly facing varied threats, operators have crucial requirements for flexible and adaptable systems that can counter the ever-changing battlespace environment. In conjunction with this, constrained budgets mean the importance of allied cooperation is more prevalent than ever and interoperability between systems and national partners is crucial for any future planning. 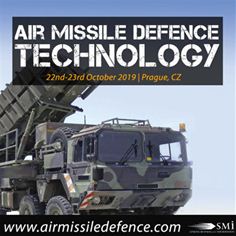 With this in mind, SMi Group are pleased to announce the 4th annual conference on Air Missile Defence Technology, taking place in Prague on 22nd and 23rd October 2019. By bringing together senior representatives from military, industry and academia, this year’s event will explore developing and improving the technologies behind Air Missile Defence programmes, to ensure they are well prepared for future mission requirements.

The event brochure with agenda has been released and is available to download online at http://www.airmissiledefence.com/vueliopr

Delegates at the conference will have the chance to hear the latest developments from a diverse range of nations including the US, UK, Israel, Hungary, the Czech Republic, France, Sweden, Lithuania and NATO.

The two-day event will feature military and technical expert speakers including:

As well as industry expert speakers including:

For those interested in attending, there is a £400 early bird discount expiring on Friday 31st May 2019. Places can be reserved at http://www.airmissiledefence.com/vueliopr

The conference is proudly sponsored by Lockheed Martin & Weibel Scientific.

About SMi Group: Established since 1993, the SMi Group is a global event-production company that specializes in Business-to-Business Conferences, Workshops, Masterclasses and online Communities. We create and deliver events in the Defence, Security, Energy, Utilities, Finance and Pharmaceutical industries. We pride ourselves on having access to the world’s most forward thinking opinion leaders and visionaries, allowing us to bring our communities together to Learn, Engage, Share and Network. More information can be found at http://www.smi-online.co.uk