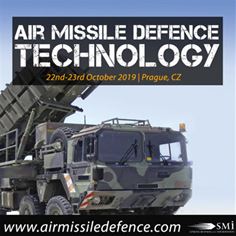 Those who attend will meet leading figures at the forefront of air defence in the Central and Eastern European region, as allied forces across the globe come together and discuss developing and improving technology behind air defence programmes to ensure they are well prepared for future mission requirements.

Senior representatives from the Central and Eastern European region presenting include:

The conference agenda can be viewed at www.airmissiledefence.com/vuelio3

To secure your place at Air Missile Defence Technology 2019, bookings can be made at www.airmissiledefence.com/vuelio3

About SMi Group: Established since 1993, the SMi Group is a global event-production company that specializes in Business-to-Business Conferences, Workshops, Masterclasses and online Communities. We create and deliver events in the Defence, Security, Energy, Utilities, Finance and Pharmaceutical industries. We pride ourselves on having access to the world’s most forward thinking opinion leaders and visionaries, allowing us to bring our communities together to Learn, Engage, Share and Network. More information can be found at http://www.smi-online.co.uk