Registration opens for the Defence Aviation Safety Conference, Supported by the DSA 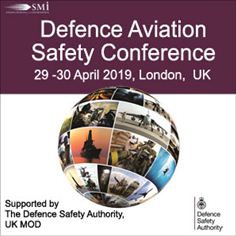 Conference organisers, SMi Group are delighted to announce that registration has officially opened for the Defence Aviation Safety Conference, the leading event dedicated to aviation safety in the defence and military environment.

Supported by the Defence Safety Authority (DSA), UK MoD, this highly anticipated two-day event will bring together senior military leaders with responsibility for safety in the aviation domain as well as international defence experts from government and industry.

Whilst it will predominantly be focused on the Air Force, the programme will feature key aviation leaders from the land and maritime domains.

An event infographic has been released, visit the website's download centre to view it: http://www.defenceaviationsafety.com/veulio

Key topics will include:

Key Speakers at the conference include:

As the only event specifically dedicated to Defence Aviation Safety, this is a must attend event for Air Force, Army and Navy Aviators, as well as government and industry experts.

There is a £400 early bird discount available until the 14th December.

View the agenda or register online at: http://www.defenceaviationsafety.com/veulio

About SMi Group: Established since 1993, the SMi Group is a global event-production company that specializes in Business-to-Business Conferences, Workshops, Masterclasses and online Communities. We create and deliver events in the Defence, Security, Energy, Utilities, Finance and Pharmaceutical industries. We pride ourselves on having access to the world's most forward-thinking opinion leaders and visionaries, allowing us to bring our communities together to Learn, Engage, Share and Network. More information can be found at http://www.smi-online.co.uk