SMi reports: Registration is now open for the Social Media in the Defence and Military Sector conference, taking place in London this November 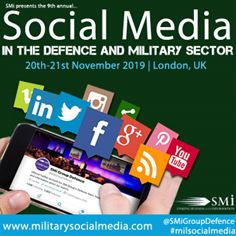 Social Media in the Defence and Military Sector Conference

Social Media has become a crucial tool for the Armed Forces in the 21st century and can be used as a platform to reach out to a global audience for information and recruitment purposes, and as a strategic communication tool for opinion forming and psychological operations.

With this in mind, SMi Group are pleased to announce the 9th annual Social Media in the Defence and Military Sector conference, taking place on the 20th-21st November 2019 in London. The two-day meeting will provide the ideal platform to discuss social media strategies, platforms and tools used in the armed forces’ day-to-day activities from branding and recruitment to frontline operations, intelligence, and cyber warfare.

New highlights for the 2019 event include:

The newly released brochure with the full agenda and speaker line-up is available to download online at http://www.militarysocialmedia.com/vuelio

Delegates will have the opportunity to engage with a dynamic audience of military officers, government officials, industry experts and social media platform specialists on crucial topics such as recruitment, cyber-security, audience engagement, crisis response tactics, combating fake news and more.

EXPERT MILITARY AND INDUSTRY SPEAKERS INCLUDE:

There is a £300 early bird discount on bookings expiring on the 28th June. Places can be reserved at www.militarysocialmedia.com/vuelio

For details on tailored sponsorship and branding packages, please contact Sadia Malick on +44 (0) 207 827 6748 or email smalick@smi-online.co.uk

For enquiries on delegate and special rates for military and government representatives contact James Hitchen on +44 (0)207 827 6054 or email jhitchen@smi-online.co.uk