Mark Roberts Motion Control specialises in precision motion and control of camera movement for a wide variety of applications, from sports broadcast to feature film and commercial visual effects. The committed and dedicated team designs and creates solutions that have seen the company’s export sales and brand reputation substantially increase year on year – with 2017 on target for another record high. 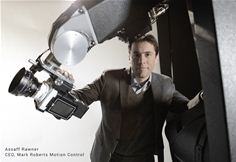 “This is Britain’s highest business award and it is a great honour to receive. Our company is among the lucky few businesses to achieve the UK’s highest trade accolade.

Last year we celebrated our 50th anniversary, so the timing of this award seems somewhat serendipitous. We’ve been creating robotics for over 50 years, and as a company have always striven to break new ground with our technology. Our engineering has taken us to the forefront of our industry, with international trade making up a large portion of our revenue. I feel this award is definitely a testament to that.”

The robotics company had its humble beginnings 50 years ago, in 1966, when Australian born engineer, inventor and part time racing driver Mark Roberts set up a company to service and upgrade old animation rostrum tables that were used in everything from film titles, cell animation and news clips.

Mark Roberts Motion Control has won numerous awards for its company’s achievements and engineering skill, including an Academy Award. It now has the honour of the Queen’s Award.

Matt Roberts, the son of Mark Roberts had a few words to say about the award:

“My father would be extremely proud of this award. He built this company from his garage. To get the UK’s most prestigious business award is incredible. I feel the Queen’s Award acknowledges MRMC’s excellence and growth as a British engineering company.”

Today, MRMC has a global presence and was recently acquired by Nikon, the Japanese multi-national corporation, who for many years has worked closely with MRMC developing imaging related technology.

About Mark Roberts Motion Control
MRMC design, manufacture and assemble robotic rigs, pan-tilt and multi-axis robotic heads, software and controllers as well as tracking technologies for multiple different industries, including: broadcast (sports, studios and educational markets), TV & film, e-commerce, security and other motion control related areas. MRMC have their robotic solutions in 47 countries. All products are designed in-house and can include customisation for specific requirements as needed and all with fast production turnaround times. www.mrmoco.com