Monaco/London, 8 June 2016 – BroadGroup announced the winners of this year's Data Centre and Cloud Awards, showcasing the best in class services and innovation in the data centre and cloud industry. The gala dinner and ceremony was hosted by International celebrity, Ruby Wax. Ms Wax captivated the audience with her fast pace wit and delighted the award winners with a photo opportunity while receiving their award. 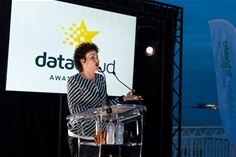 The awards were presented on the evening of 7 June at Le Méridien Hotel in Monaco and attended by over 600 executives from the data centre and cloud industry. Entries were judged across a range of award categories.

The winners of the 2016 Data Centre and Cloud Awards are:

Data Centre Above and Beyond Award: CBRE Data Center Solutions

Cloud Above and Beyond Award: 6 Degrees Group

Also at the ceremony Mr. Paolo Bertoldi of The European Commission presented awards for the European Code of Conduct for Energy Efficiency.

Gerd J. Simon, chairman of the Judges Panel commented: “The Data Centre and Cloud Awards celebrate some of the best companies, individuals and technologies in this increasingly challenging and competitive industry. Simon continued ”all the categories were hotly contested, with entries of outstanding quality reflecting the amount of change and innovation that is happening in the industry right now. We congratulate the winners on their achievement.”

The Awards show took place before the Datacloud Europe 2016 Conference in The Grimaldi Forum.

Philip Low, managing director of BroadGroup said: ”The Data Centre and Cloud Awards now in their ninth year, has become one of the most important international events in the industry’s calendar. The awards have changed significantly over the years and today they reflect the continuing evolution of the IT industry and the global services in this sector. I am also delighted that Ms Ruby Wax agreed to host the awards and entertain our esteemed guests, making it the most memorable event we have ever held.”

After the success of the event we are now looking forward to the special 10th anniversary awards which take place in Monaco in June 2017. Join us there.

About BroadGroup
BroadGroup is an Information Media Technology and Professional Services company. Established in 2002, BroadGroup achieved rapid recognition and growth through delivering quality research and insight in a number of niche and emerging areas of the telecommunications and technology sector. Since founding, the Datacentre and Cloud practice has been the main focus of the company. BroadGroup has now become the leading international research and consulting group in this area, through three business lines: consulting, market reports and events. http://www.broad-group.com/