With the RAF remaining at the forefront of delivering airborne intelligence for UK operations, SMi Group are pleased to announce that the agenda for the Airborne ISR conference taking place on the 23rd-24th October 2019, includes three key UK senior military speakers set to deliver insightful presentations, thoroughly covering the intelligence chain: 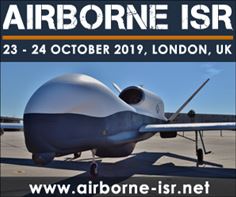 Wing Commander Mark Jackson, Officer Commanding No. XIII Squadron, RAF, will present on ‘Preparing for Protector: Challenges of Developing for Ops, whilst simultaneously Delivering on Ops’.

In addition to the UK, this year's conference will host an international gathering of high-ranking experts from NATO, US, Germany, Canada, Australia, Portugal, The Netherlands, TNO and more.

The newly released brochure with the two-day agenda and full speaker line-up is available to download online http://www.airborne-isr.net/vuelio

In anticipation of the event, a comprehensive list of past delegates has been released and is available to download from the website, giving prospective delegates an idea of the international organisations they can expect to meet and network with at this year’s event.

For those interested in attending, there is a £400 early bird discount expiring on Friday 31st May 2019. Places can be reserved at http://www.airborne-isr.net/vuelio