With more than half of the traffic accidents reported last year in Singapore involving motorcycles, and one in three road fatalities being motorcyclists, Singapore-based startup Whyre have created the world’s first smart motorcycle helmet which they hope will make riding on roads safer.

The Argon Transform is a dual-camera system which works by sticking one camera to the back of a helmet and another to the front. The front piece acts as a high definition dash cam with a black box recording feature, and has a simple mounting system that should work with any helmet. The back piece holds a rechargeable battery which the manufacturers estimate should last for five hours of use, plus a dedicated high-speed computing board, a high definition wide-angle lens camera, Bluetooth integration, expandable memory, and an audio and microphone system. 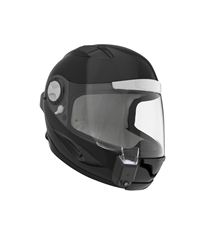 Once in place, the Transform displays an overlay image in the peripheral of the rider’s vision. The image is semi-transparent so it doesn’t block the view of real-world objects, and it can display information like a rear-view camera feed, a visual map and audio navigation system, a virtual speedometer, caller ID, and the time. The image is overlaid in a position designed to be easy to focus on which should reduce visual stress. In addition, the front camera can be used to record rides for fun or in the case of an accident. If there is an accident, the footage will be backed up to an isolated memory compartment using the BlackBox feature.

As you would expect from a smart helmet, the attachment can be paired with a smartphone through a dedicated app which can log mileage, calculate average speed, bookmark locations, answer phone calls, and listen to music. These functions are controlled with a separate button controller.

The Whyre company is a group of five graduates including one former member of Singapore’s ambulance force, all of whom have lost friends in motorcycle accidents and who wanted to find a way to increase rider’s situational awareness. The Argon Transform will be launching on a crowdfunding platform early this year and is expected to cost around $680 retail.

In August last year, the first product design prototype was revealed to the biking community at the Singapore Bike Show, and garnered great interest from both local and overseas riders.

Even though the working prototype is still being tested and upgraded and the finalised product not set to hit the market until August this year, Whyre has already received 500 international pre-orders, with some buyers willing to place a cash deposit.