As Google+ approaches its 2nd birthday, new Searchmetrics data indicates it could surpass Facebook in the key area of social sharing within three years

New York, June 20th, 2013 – Sharing of online content by users on the Google+ social network is set to surpass sharing by Facebook users by February 2016 according to a new US study from search and social analytics specialist, Searchmetrics. The forecast comes in the run up to the 2nd anniversary of the introduction of Google+ which was first announced at the end of June 2011. 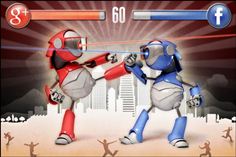 Google+ v Facebook - who will win the social sharing battle?

Encouraging people to share URLs for web content they find online with their friends on Google+, and collating data about how actively these links are shared and by whom, is very likely  a vital part of Google’s strategy for delivering fast relevant search results according to Marcus Tober, founder and CTO of Searchmetrics.  And his company’s analysis indicates that Google+ is enjoying rapid success in this area.

“Google wants as many people as possible to share things – web pages, blog posts, videos etc - they find useful and relevant with people they are connected to on Google+. It can roll up this information into the mass of data that helps it understand which content people consider valuable and useful and give it insights about how to position it in search results. This social data will also help Google build more personalized search results that tie in with a person’s social network connections and activities – something for which many people think Facebook has a head start,” explains Tober.

“But our data shows that within three years Google could succeed in generating more sharing activity – and collecting more data about this activity - than Facebook.”

The Searchmetrics study is based on a comparison of the average monthly growth in the number of Facebook ‘shares’ and their equivalent, ‘plus ones’, on Google+ in the US, covering the 6 month period from November 2012 to April 2013.

During this period the number of Facebook shares in billions grew by almost 10% per month. While Google+’s average growth of plus ones was almost 19% per month.  At these rates of growth, the development of sharing activity on the two networks would mean that Google+ would be generating more monthly shares (plus ones) than Facebook by February 2016. By May 2016 Google+ would be predicted to achieve around 1096 billion shares (plus ones) per month while Facebook would be generating approximately 849 billion shares per month (see accompanying chart 1 – Google plus social sharing to overtake Facebook).

“While it still has a relatively small base, Google+ activity and users are growing at an insane speed. And the unthinkable is possible - in terms of the important area of sharing activity at least, our data shows it could actually catch up with Facebook if the trend continues,” explains Tober, whose company maintains a global database of data collated from social networks and search engines which it uses to power its analytics software for search and social marketers.

Google is doing everything to ensure the current growth rate for sharing will continue according to Tober, who cites strategies such as the mandatory creation of a Google+ account as part of the activation for Android smartphones, as well as integration of Google+ with new services such as Google Glass.

“This year Google announced that its Android operating system has over 900 million activations.  So since last year, this means a growth of over 100% on the basis of 400 million activations about a year ago. And these are all directly connected to a Google+ profile,” said Tober

“In April 2013, the absolute number of shares for Facebook was over 29 billion compared with just over 2 billion plus ones for Google+ - so Facebook activity in terms of sharing was fifteen times greater than that of Google+,” said Tober

“Facebook, is growing from its extremely large base to something larger, and is therefore slower. But it’s remarkable that Facebook is still growing. And that's why the blue giant appears to be unquestionably ahead of the market right now.  But our data shows Google+ can catch it if growth rates for sharing activity continue as they are.”

A separate Searchmetrics study of  Google+ user activity (based on a representative sample of 100,000 randomly selected global user profiles) indicates that the group of users who are actually active on Google+ appears to be relatively small – but is still enough to have caused the considerable growth in sharing activity.

As part of this separate analysis, Searchmetrics counted users with at least one post (ie a status update)[1] on their profile as ‘active’ users and found that only 24.39% of Google+ users had any kind of posting activity whatsoever on their profiles since the social network was launched. In other words, only one in four Google+ users can be considered active in this sense.

“There appears to be many Google+ accounts which are inactive right now.  But by linking so many of its services with Google+, Google is hoping that over time more people will start to become active on its social network,” said Tober

The latest data published by digital marketing analysis firm eMarketer indicates that Facebook is currently the most popular social network with around 51% of global internet users logging onto the site at least once a month. Google+ comes second with a penetration of 26% of internet users worldwide.

[1]The study only considered postings that users have made publicly visible. It is possible that some of these users did post something which is not publicly visible. However, Searchmetrics believes the figures provide a good representation of activity levels

About the Searchmetrics studies
Searchmetrics has an IT infrastructure which collates anonymous global data on social network activity on the main global networks. This data populates the constantly updated database which underpins its software.  For the studies quoted above, the company analyzed anonymous data on user sharing activity on Facebook and Google+.

About Searchmetrics
Searchmetrics is the pioneer and world's leading provider of search and social analysis software for companies and online agencies. Searchmetrics has a unique server infrastructure and software solution – its Searchmetrics SuiteTM – which its clients and partners continually use to aggregate and analyze very large volumes of data on the rankings of websites, keywords in searches and competitor groups. Searchmetrics SuiteTM gives users unique insight into the visibility of websites on search engines in 124 different countries and on the largest social media portals. This information plays a decisive role, especially in inbound marketing, where having excellent visibility on search engines is essential for companies to reach potential customers on the Internet.